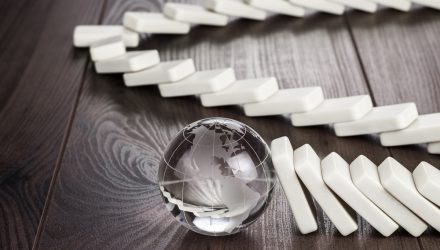 Domino Effect – Implications of an Energy Shortage on a Global Economy

Recent re-openings in the United States and Europe have caused a surge in demand for energy as China’s manufacturing industry moves to meet the increase in orders. Demand for natural gas has pushed coal prices up. Despite promises to raise output, OPEC has been unable, resulting in tighter supply and higher oil prices. Concurrently, droughts in southwestern China reduced hydropower production, causing a heavier reliance on coal. A combination of increased demand and reduced supply has led to a huge spike in energy prices that we believe is uncomfortably destabilizing.

China and the Eurozone have borne the brunt of its impact so far. The spike is being felt globally, as China, one of the world’s largest exporters, has been forced to drastically cut electricity in many parts of the country, significantly impacting many manufacturers. This has negatively impacted production operations, effectively choking an already strained supply chain due to COVID. In the UK, petrol stations are running out of fuel, not due to a shortage of product supply, but rather a shortage of labor supply.  A migration of workers hastened by Brexit, high unemployment due to COVID-19, and massive delays in testing for new drivers, have all led to an extremely low supply of fuel-tanker drivers. The supply is so low that earlier this week the government offered temporary visas to foreign drivers and deployed military personnel to help deliver fuel. The energy crisis goes a bit further by chipping away at consumer’s discretionary income in Europe as energy bills rise due to low stockpiles of natural gas, weak output from renewable energy sources, and an inability to diversify energy sources in the short-term.

Headline articles like “The supply chain is messed up – start holiday shopping now” suggest production issues resulting from energy shortages will continue globally for a while, resulting in scant inventory and shipping delays. During the winter months, we typically see a higher demand for energy. That demand increase, coupled with low levels of natural gas, could put further pressure on energy prices, pushing them even higher. The biggest concern now appears to be that the shortages, although believed to be temporary, will weigh on inflation as energy makes up a considerable portion of CPI baskets worldwide. This would result in more upward pressure on inflation and potentially prompt the Fed and other central banks to take on a more hawkish tone. Adding to inflation driven by energy prices, imbalances in the supply of and demand for labor could put upward pressure on wages.

We believe that COVID-19 exposed many of the fundamental flaws within the world economy that had been brewing for years rather than caused them. The most recent effects on the global supply chain are no different. A decades long progression towards reduced competition allowed monopoly-like industries to thrive. Companies increasing overseas investment in chase of cheaper costs have led to a dependence on foreign production. This translates to low domestic supply that can only meet fiscally stimulated pent-up demand by relying on international imports.

The post-recovery consensus has so far maintained that these disruptions and shortages are mostly temporary and would ease in the near-term. However, the supplier delivery times index is lengthening, the backlog of orders index is rising, and the increasing costs of raw materials are being felt in major export countries like Japan. As these costs accrue to consumer prices, it is plausible that some of these shortages lead to stickier inflation. With the global economy set up like dominoes and pressure from persistent shortages spilling over into prices, it begs the question – when is transitory no longer transitory?