COVID-19 – Trends and Progress for the New Coronavirus

After a muddled start, will improved testing in the US alter the outcomes?

There are lots of statistics flying around and many individuals are confused at which set of numbers they should monitor. The data that Main Management has been watching has been sourced from the website https://www.worldometers.info/coronavirus/

As of around midday, March 22nd, the website indicated that there have been 14,611 deaths around the world, versus total cases reported of 335,366 … for a worldwide fatality rate of 4.10% (global deaths as a percentage of total global cases). The recent cumulative trends are as follows:

So, a number of questions arise. Is the incidence of fatality accelerating? Are all countries experiencing the same type of contraction and morbidity? What influence does testing, and the speed of that testing, have on the ultimate numbers? As an example of how difficult it is to determine, the recent United States figures going back four weeks are shown below and are volatile as they are still based on a small sample size.

Does this actually mean the mortality rates are declining in the USA and that our country is that much lower than the world average? We feel that the number may remain in flux. Since the testing capability of the United States is just beginning to dramatically ramp up, the number of cases of infection will spike, but the key question will be whether a larger denominator in the equation will result in a lower death rate percentage. We think it will. The numbers for our country should become more accurate with more data, but will our numbers resemble China and/or Italy, or other countries that appear to be faring better, like South Korea, Germany or Austria?

The chart below shows the countries which have reported more than 1,000 cases of the Coronavirus as of around 3 pm PST on March 22nd.  There appears to be a distinct difference in the mortality figures by country. There are currently four countries, ranked in order by the total number of cases reported, where the mortality rate is below 1% — notably Germany (over 25,000 cases with a death rate of 0.38%), Austria (0.45%), Norway (0.31%), and Denmark (0.93%). We believe that Germany is the most appropriate to follow as they have had more than 25,000 cases reported.

At the other end of the scale, Italy has reported the most absolute number deaths, so far, with 5,476, and the highest death rate at 9.26% (as of around 3 pm PST on March 22nd). China, if we are even to believe its numbers, has reported 3,270 deaths (close to zero new deaths were reported over the past 5 days) and has a mortality rate of 4.03%. For perspective, those two countries makeup roughly half of the world’s reported case and around two-thirds of the deaths from Coronavirus. 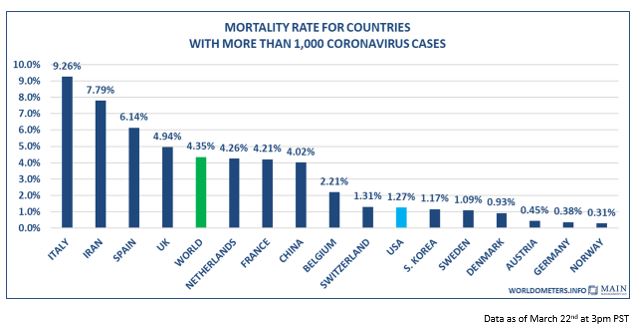 In the United States, the more we test, the better the accuracy of the mortality rate should be. But will our ultimate mortality numbers move toward the figures worldwide or toward the results of Germany? From everything we read, the faster that accurate, comprehensive, tests can be given, the better the virus can be contained, thereby lowering the incidence of death, because appropriate and more effective quarantining can take place. It really depends almost entirely on the speed and efficacy of testing.

The United States started off on the wrong foot in regard to providing effective tests. While our country was very early relative to other countries in restricting some inbound travel, which no doubt helped to contain potential problems, we didn’t do a good job in preparing test kits for the virus. Federal regulations barred any labs outside the federal government from developing a test to diagnose the Coronavirus. The CDC sent out its first test kits on February 5th. The problem was that … they were defective … as they created false positives!

The FDA rules prevented the states and/or commercial laboratories (i.e. the private sector) from developing their own diagnostic tests. Thankfully, that impediment was reversed on February 29th and, since then, the ramp-up of test kits has been greatly improving. The original tests were slated to take two to seven days to receive an answer. After the regulatory barriers were lifted, the Cleveland Clinic quickly developed a test that delivered results within eight hours … and progress is being made to shorten that response time even more.

One example of better pricing and speed comes from a company called Co-Diagnostic, a molecular diagnostics company based in Utah. We understand that they have a COVID-19 test which costs only $10 and can produce test results in only 90 minutes. Their potential production capacity is 50,000 TEST KITS PER DAY. Their test kits are currently in use in Italy, Germany, the UK, Turkey, Greece, and many other countries. The change in regulations on February 29th now allows them to distribute their product to labs in our country without requiring emergency use authorization.

Yesterday, the Food and Drug Administration approved the first rapid COVID-19 diagnostic test, with a detection time of about 45 minutes.  The emergency use authorization from the FDA for the test was granted to a California-based molecular diagnostics company named Cepheid.  This would be half the time of the aforementioned Co-Diagnostic test.  This further underscores the innovation emerging from the private sector to alleviate this challenging pandemic. Additionally, there are other examples of private-sector solutions as some companies like CVS and Walmart are starting to offer drive-through tests like those being offered in South Korea. We would anticipate a further rollout of that capability shortly.

Ultimately, what matters is measurement. Germany immediately used decentralized, independent labs to do their testing without needing a green light go-ahead from their government. Now that the private sector has kicked in, we predict our numbers will trend toward those of Germany instead of either Italy or China. While there is yet much to do, we believe that after an initial stumble out of the blocks, our country is now on the right path to address and ultimately contain the virus.

We certainly hope and pray the mortality rate continues to decline and a vaccine can be found quickly and that all those who read this article will stay safe!