You are at:Home»ETF Strategist Channel»Covid-19 Shock to U.S. & Global Economies Continues to be Felt Daily 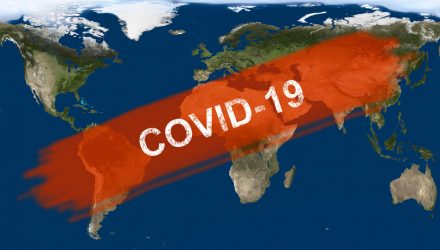 August saw the US economy continue to recover from the second quarter’s Covid-19 induced economic pause, with most data pointing to a quicker than anticipated bounce back in many sectors of the country. Unemployment remained stubbornly high as pundits debated whether increased jobless benefits were the culprit. July’s unemployment rate came in at 10.2%, down from June’s 11.1% and beating economist expectations for 10.6%.

Average Hourly Earnings rose 0.2% MoM and are now up 4.8% YoY while the Labor Force Participation Rate held steady at 61.4%. The JOLTS Job Openings number came in stronger than expected at 5.889M, up markedly from June. As mentioned above, Congress had passed legislation offering an additional $600 per week of unemployment benefits, resulting in many workers earning more by staying home. As we go to press, this extra benefit had been reduced to $400 per week, potentially bringing more back into the workforce.

Housing remains an anomaly here during the pandemic, holding up strongly in many areas of the country. Housing Starts for July surged 22.6% MoM while Building Permits rose 18.8% and Existing Home Sales soared 24.7% above June. Home prices as measured by the S&P CoreLogic CS 20 City index were flat MoM but remain up 3.46% YoY. Larger urban areas continue to see weakness as residents migrate to suburbs and less dense communities.

Whether this trend continues post-vaccine remains to be seen but for now, price weakness in major cities like NYC, San Francisco and Boston is creating opportunity for those bold enough to swim against the tide. The shock to the US and global economies from Covid-19 continues to be felt on a daily basis.

Until a vaccine can be widely distributed and embraced, it’s likely that the travel and leisure sectors will continue to suffer as social distancing remains the norm. The good news is that it appears a viable vaccine is in the offing with something possibly available by year-end resulting in potentially a swift turnaround in that space.

Last week the U.S. posted the lowest number of confirmed cases since June, at 34,000 according to Johns Hopkins. With U.S. elections a mere two months away, equity markets remain somewhat complacent, continuing to grind higher thanks to mega-cap Technology companies such as Apple. Interestingly, volatility rose along with the broad market in August, with the CBOE VIX Index jumping +8.0% to 26.4 on the month.

The Fed’s shift in monetary policy and lower for even longer pledge helped buoy Growth stocks relative to Value stocks, a continuation of a trend that continues to leave investors mystified. Growth stocks, as measured by the S&P 500 Citi Growth Index rose +9.6% on the month, compared to +3.6% for the S&P 500 Citi Value Index.

The Growth vs. Value performance gap continues to widen, hitting more than 34% over the past 1-year, and more than 10% annualized over the past 5-years. Clearly, investor appetite for Growth in an ultra low rate environment has persisted, and shows no signs of abating as investors look further out into the post-COVID-19 world.

International equities posted positive gains in August with both developed and emerging markets following US markets higher. Developed Markets (DM), as measured by the MSCI EAFE Index, rose +5.2% on the month, but remain down -4.2% YTD. Emerging Markets (EM), as measured by the MSCI EM Index, on the other hand trailed DM on the month, rising +2.2%, but remain in positive territory YTD with a +0.7% gain.

International returns have favored EM over DM over the trailing 1-, 3-, and 5-year periods, with EM returning +14.9%, +3.2%, and +9.1%, respectively on an annualized basis. Within DM, the Eurozone, as measured by the MSCI EMU Index, has been stuck in no man’s land for the past 5-years (and perhaps longer), returning -1.9%, +1.4%, and +4.1% annualized over the trailing 1-, 3-, and 5-year periods. While the Eurozone has struggled economically, and lagged in terms of investor returns, the tide may be turning.

New policies enacted as part of coronavirus relief have buoyed the Euro to multi-year highs versus the Dollar, which could be sewing seeds of optimism for the rest of 2020 and beyond. From a sector standpoint, international growth remains elusive, as Technology represents less than 10% of MSCI ACWI ex USA. Consumer Discretionary was the top performing sector on the month, gaining more than +10%, while Technology returned a scant +0.8%; however, Technology returns have been relatively impressive over the past 1-, 3-, and 5-year periods, returning +38.7%, +13.5%, and +19.3%, respectively on an annualized basis.

Lastly, in perhaps a sea change of sorts, Warren Buffett’s Berkshire Hathaway invested more than $6 Billion in 5 Japanese investment companies, highlighting how one of the greatest investors of alltime views international markets on a go forward basis.

The Federal Reserve held their annual Jackson Hole conference, where Chairman Jerome Powell announced some changes, tweaks really, that came out of the Fed’s recent policy review. The modification that seemed to get the most attention was shifting from a target of 2% inflation, to an average inflation target of 2%. Big change? Not exactly. It allows the Fed to look at 2% inflation as a longterm goal which can undershoot and overshoot for periods of time without necessarily requiring intervention.

This attempts to slow how quickly the Federal Reserve will move to cool off a hot economy for fear of rising inflationary pressures. A second modification was made, with a similar intent to allow the economy to run hot and slow Federal Reserve intervention. Conventional economic thinking has been that a strong labor market (very low unemployment) would fuel inflation as represented in the Phillips Curve. This expectation has allowed the Federal Reserve to raise interest rates and try to dampen economic expansion as a pre-emptive attempt to head off inflationary pressures.

The increase in interest rates was a headwind for most of the fixed income universe. With rates relatively low on investment grade bonds, it does not take much of an increase in yields (decrease in price) to offset the income earned by the bond, producing a flat or negative return. High Yield and Emerging Market bonds did have a positive showing in August, due to their higher coupon payments more than offsetting the rise in rates. While they have provided an attractive one-month return, the year-to-date returns continue to trail higher quality fixed income holdings. So far, the winning strategy for pandemic fueled fixed income investing remains long duration investment grade bonds.

Alternative investments were a mixed bag in August with U.S. Dollar weakness propelling most commodities, as the DXY Index lost -1.3% on the month, and is now down -4.4% YTD and -6.9% over the past one year period. After peaking in 2016, the Dollar is now down -9.9% and may have more weakness ahead as interest rates remain low and budget deficits widen.

The Dollar’s weakness helped commodities, as measured by the Bloomberg Commodities Index, edge up +6.8%, while West Texas Intermediate (WTI) crude oil gained +5.8%, or more than $2/barrel, to close just shy of $43/barrel, the highest monthly close in six months. Real Estate returns were tepid in August, with the FTSE NAREIT All REIT Index gaining just +0.2%, and remain down -13.6% on the year. Within the Real Estate market, Cell Towers, Data Centers, and Logistics Warehouses for e-commerce have been standout winners, while much else has been left behind.

Gold prices lost $8/ounce, or -0.4% on the month to close at $1,968/ounce in August. Gold prices have been on a tear since the beginning of the year, gaining nearly +30%, but have consolidated gains recently as prices crossed the psychological $2,000/ounce level. Looking forward, a lower for longer interest rate environment, coupled with inflation targeting above the Fed’s prior 2% threshold should continue to be supportive of the shiny metal. On the currency front, the Euro closed at $1.20 EUR/USD, a multi-year high, while the Pound and Loonie strengthened to $1.35 USD/GBP and $1.30 CAD/USD as the Dollar remains under pressure.

Appreciating foreign currencies have the potential to add a third element (besides price and dividends/interest) to US based investors investing in Dollars overseas. Moving forward, continued Dollar weakness could be additive to total returns and increase investor confidence in their capital allocation decisions. Lastly, all nine Hedge Fund strategies tracked posted positive returns on average; however, year to date returns range from -5.11% to +8.67%, highlighting the struggles of a low interest rate environment.