You are at:Home»ETF Strategist Channel»The Countries Most At Risk Of A Trade War 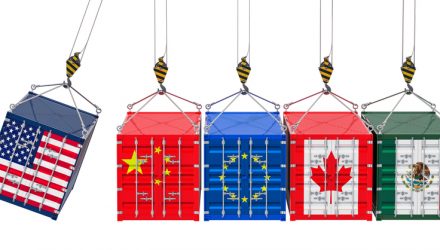 The Countries Most At Risk Of A Trade War

We wrote a piece a year ago about tariffs and the potential economic implications of a trade war. Though details of tariff policies and the responses from affected countries were not clear at that time, we thought that the tariffs would have little economic impact based on available policy information.

Now that we are a year into this new tariff regime, we can see some of the implications. For example, soybean exports spiked ahead of new tariffs, then collapsed. Soybean exports have now recovered to levels closer to historical norms, as you can see in the graph below. Further fluctuations in the agriculture space are as likely to be weather related as anything.

Regarding the current round of tariff escalations with China, we expect the economic implications to be limited and not helpful for either side. For example, total trade with China represents only 3.26% of U.S. GDP (imports 2.59%, exports 0.67%) and 5.19% of China’s GDP (imports: 1.06%, exports 4.13%), so the impact of tariffs and accompanying trade adjustments are likely to be minor compared to other more impactful influences. However, if we end up in a full global trade war, the playing field looks very different for each player and country.

How to Determine Who is at Risk

Trade as a percentage of the global economy has been steadily growing since 1960 but may have peaked a few years ago at more than 60% (exhibit 3). The latest figure of nearly 58% for calendar year 2017 represents a slight pullback but is still reflective of a globally integrated economic system.

If this trade system were to be disrupted through a global trade war or other phenomenon, certain countries would likely be more at risk than others. Fundamentally, the overall impact on the U.S. economy is likely to be minimal. Yes, the raw numbers look large, but all things must be taken into context. For example, the amount of trade relative to the size of the economy: exports make up just 12% of U.S. GDP while imports are 15% of GDP, so total trade (imports plus exports, and a good estimate of the total impact from trade frictions) accounts for 27% of U.S. GDP.

Clearly, the impact of trade frictions on the U.S economy would be less than the average OECD nation. The U.S. is just not a trading nation. In fact, among the OECD nations, measured as a % of GDP, no one trades less than we do. It seems like the market has been looking for a reason to sell off, but tariffs are not a fundamental risk for us. Other countries are even more exposed, such as Singapore at 322%, Vietnam at 200%, Hungary at 169%, Mexico at 78%, Canada at 64%, and the United Kingdom at 61%.

An Overview of GDP and Trade Figures

Obviously, trade is not a zero-sum game, so trade can represent more than 100% of their economy for some countries. Gross Domestic Product (GDP), which is a favored measure of economic activity, is calculated using the following five components: Consumption [plus]Investment [plus]Government Spending [plus]Exports [minus]Imports, or C+I+G+X-M. Consider a small country that has $1 billion of consumption, $1 billion of investment, and $1 billion of government spending. Next, we analyze their exports and imports. This country has a large factory that produces more goods than the country consumes, and exports $2 billion of goods. GDP is now $5 billion ($1B+$1B+$1B +$2B). The country uses that money from exports to import goods and services worth $2 billion. Imports are subtracted from GDP, so total GDP is again $3 billion ($5B – $2B).

What to Look for Next

In general terms, the larger the ratio of trade to the size of an economy, the more important trade is to the success of that economy. It makes sense then that the greater the proportion of trade is to an economy, the more vulnerable that economy is to a disruption in trade, such as a trade war. Of course, the size of the impact will be dependent on the nature of the trading relationships.

For example, though trade represents 64% of the Canadian economy, much of that trade is with the U.S. and is unlikely to be affected by a trade war. Other countries are likely to be more vulnerable. Based upon the facts as we know them today, we do not see a large-scale trade war in the future. More importantly, we do not think these tariff talks, and trade threats will cause a major disruption in the global economy. As we mentioned after the surprise Brexit vote and the following market selloff, the people who negotiate these deals understand their economic history and the importance of trade to economic wellbeing. Though markets may go through bouts of panic, we expect global trade to continue largely unabated and economic fundamentals to remain solid.