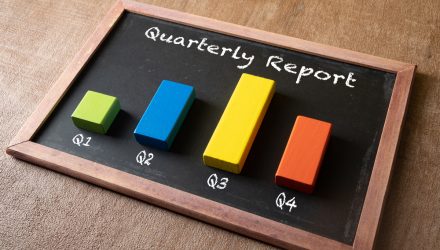 The IMF recently cut its forecast for 2023 global economic growth, representing the fourth consecutive downward revision this year. In its release, the IMF expects a contraction in over one-third of the global economy next year and stated that “this is the weakest growth profile since 2001 except for the global financial crisis and the acute phase of the COVID-19 pandemic,” citing the ongoing Russian invasion of Ukraine, global cost-of-living increases, and the economic slowdown in China that will lead to a volatile economic and geopolitical environment. Despite the revisions, virtually all global central banks are engaged in various forms of tightening, with the only current exceptions being Russia, Turkey, China, and Japan. While the BOE, ECB, and BOJ are arguably engaged in various forms of yield curve control in attempts to address their respective problems of pension schemes solvency, peripheral country spreads, and a longstanding deflation mindset, the U.S. Fed is singularly focused on reducing inflation through aggressive increases in the fed funds rate and accelerating quantitative tightening through reduction of its balance sheet holdings by $95 billion per month, against a current balance of $8.2 trillion. 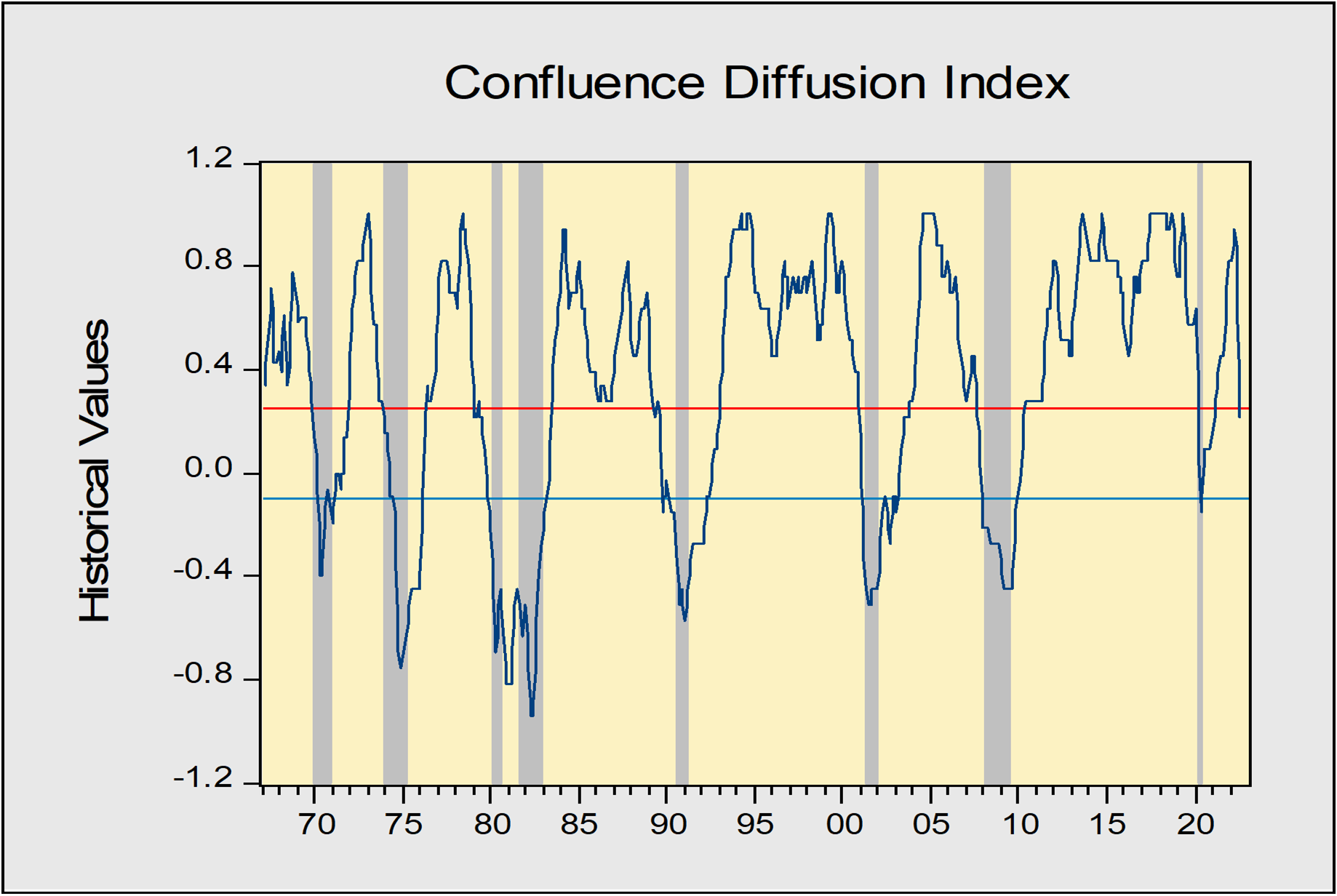 For the U.S. economy, the assertive Fed posture has led to a cascade of expectations for a recession to commence within the next nine months. While the increasing potential for a future recession has been our contention since the second quarter of this year, we found a degree of confirmation at the end of last month when the Confluence Diffusion Index, shown on the accompanying chart, signaled that the business cycle is headed toward a contraction. Among its 11 leading indicators, five either slipped or continued their descents into negative territory, including Consumer Confidence, Manufacturers’ New Orders Non-Defense Capital Goods, Wilshire 5000 Index, Real M1 Money Stock, and the 10-Year/3-Year Treasury Spread. The full Business Cycle Report (9/29/22) from the Confluence macro team is available via this link.

The Fed’s strides to dampen inflation through affecting demand and creating labor market slack have had a limited effect on recent economic data. Inflation has eased from its zenith of +9.1% year-over-year in June to +8.2% in September, and U.S. Customs data recorded a decline from August (-12.4%) for inbound volumes to U.S. ports. However, the most significant influence in the Customs data was collapsing imports from China, which in our view underscores the deglobalization trend. Labor markets remain strong, as evidenced by the BMWED rail union’s rejection of a 24% wage increase and $5,000 bonus, creating the potential for a strike after November 14. This potential, in combination with difficulties encountered in West Coast port labor negotiations, portends a resumption of supply chain delays and further inventory builds, which could delay a significant decline in inflation. Although supply chains will eventually adjust with a coincident decline in inventories, deglobalization will lead to an increase in the volatility of inflation, which we conclude will shorten business cycles.

While our premise is an inevitable path toward recession, its depth, severity, and duration are all in question. Since the current composition of the FOMC has in the past exhibited a tendency to pivot, the likelihood that it would do so again is well within the realm of possibility, especially as a recession takes hold. Arguments in favor of a “normal,” as opposed to deep, recession are solid fiscal positions among state and local governments, corporate balance sheets that have not become overleveraged, and the overall financial health of households. Despite the seismic shift in the yield curve that has dampened demand for housing, mortgages as a proportion of home values have declined markedly since the Great Financial Crisis. Those who prognosticate an echo of the housing crisis that crippled the economy in 2008 will find scant evidence in the current data. The lack of fiscal excesses that typically precede recessions support the expectation that an impending recession in the U.S. will be normal. Nevertheless, the potential exists for a major policy mistake, significant geopolitical event, or fracturing of a segment, such as what has occurred in the U.K. gilt market, to emerge that would cleave a deeper recession.

The U.S. equity market hit its zenith on the final day of 2021 and has been on a swooning trajectory ever since. The Fed’s zeal in combatting inflation has investors on edge regarding the potential for aggressive rate hikes and quantitative tightening to contribute to a U.S. recession. Over recent periods, good economic news has translated into bad news for markets as signs of continued strength in employment data have caused market participants to expect increased, or at least continuing, vigilance by the Fed as it wields its blunt inflation-fighting weaponry. 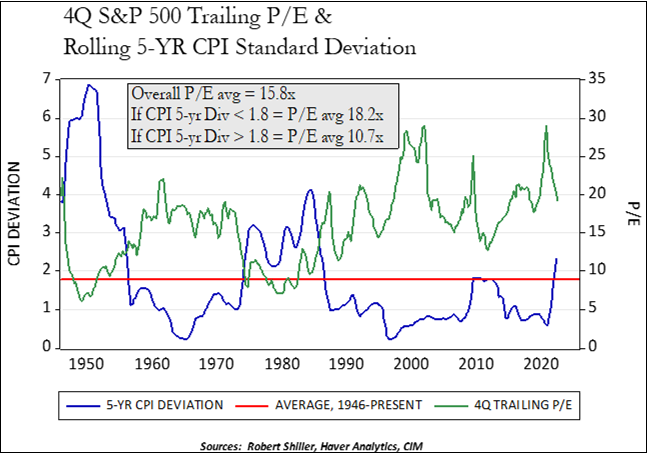 We believe earnings will come under pressure should labor markets stay tight, inflation remain elevated, impediments to global trade persist, supply chains adjust, and inventories continue to build. To isolate one of these facets, high inflation has always proven costly to corporate equity valuations. As this chart shows, when the rolling five-year CPI deviation is in excess of 1.8%, it exerts a gravitational pull on the S&P 500 price/earnings ratio as it increases the cost of capital for businesses. Not only is it increased through rates that must be paid on lines of credit, floating rate bonds, and through new debt issuance, but the decline in equity prices makes it more costly for companies to utilize their stock as currency for acquisitions. An additional headwind is the new 1% buyback tax anticipated to go into effect in January. Corporate share repurchase programs are likely to be pulled forward into this year in order to stave off the tax. Changes in tax policy influence capital allocation decisions, thus it could end up benefitting dividend-paying companies.

Although our outlook calls for inflation to eventually be contained over the three-year forecast period and we expect a normal recession, discretion dictates that equity exposures in the Asset Allocation strategies remain suppressed at this juncture. Among U.S. stocks, we find traditional valuation metrics of price-to-earnings, price-to-book value, and price-to-free cash flow to be favorable among lower capitalization companies, particularly mid-caps. We believe this should offer some protection in the event of a continued downturn in equity prices as well as an advantage when markets begin to recover. Beyond the U.S., given the strength of the U.S. dollar and the different monetary policies being pursued by global central banks, we anticipate headwinds in international equities for U.S.-based investors. This extends to emerging markets, especially due to the overwhelming influence that China wields, both through trade as well as its nearly 40% position in broad emerging market equity indices. The reduced foreign direct investment in emerging economies during this period of elevated sovereign risk is of further concern. Accordingly, despite attractive valuations overseas, the equity exposure in the strategies is entirely domestic. We retain the prior skew to value over growth, as it has existed since mid-2021. In the U.S. large cap asset class, we have elevated the relative overweights to the defensive sectors: Health Care, Consumer Staples, and Energy. The industry concentration of aerospace & defense is similarly elevated as a proportion of U.S. large cap exposures.

The fervency displayed by the Fed in its attempt to eradicate excessive inflation encourages caution regarding the bond market. As of this date, all tenors of the Treasury yield curve one-year and beyond are inverted, indicating not only the market’s interpretation of an impending recession, but also the potential for the Fed to temper its fight and even pivot to a moderate or dovish stance in recognition that its vigor was too much and/or too late. Its data-driven approach has certainly made its future moves opaque. To a degree, this opacity has contributed to the worst bond market returns in over 30 years. Oddly, while market participants are viewing recession as a near certainty, spreads on investment-grade corporates remain close to the 100-year historical average. Although corporate balance sheets were buttressed during COVID through their staggering of maturities at attractive rates, thereby avoiding the debt refinancing wall, economic downturns, especially during bouts of inflation, have almost always led to a widening of spreads well above the historical mean. Due to our forecast, the strategies are positioned with a majority of the bond exposures in the short-intermediate segments of Treasuries.

One exception to this positioning is the introduction of a small allocation to long-maturity zero-coupon Treasuries in light of the potential for increased geopolitical strife. In the event of sovereign defaults beyond Sri Lanka and/or new manifestations of international belligerence, a long-term Treasury position is intended to function as a stabilizer. The other exception to the more conservative short-intermediate stance is an increase in BB-rated bonds within the speculative grade bond asset class, which serves as an equity surrogate, essentially moving up the capitalization structure of corporate balance sheets. Spec bonds hold high correlation to U.S. large cap stocks, yet with more muted volatility, especially in periods of economic retrenchment.

While REIT valuations appear compelling given that this sector of the U.S. equity market has suffered worse than others this year, we continue to regard the asset class with circumspection as offices, retail, and hospitality maintain their slog through the aftereffects of the pandemic coupled with difficulties typically experienced by REITs during economic contractions. Although we believe energy supply will be constrained by the Ukraine war, OPEC cutbacks, unrest in Iran, and lack of production investment, the potential for a global recession would not only offset the advantage of repressed supply, but also weigh on prices of other commodities. The exposure in the strategies to the commodity asset class, therefore, is now significantly reduced. Gold and broad-based commodities, with a concentration in energy, are now split equally as they can serve as havens during a period of near-term economic fragility and the potential for increased geopolitical risk.