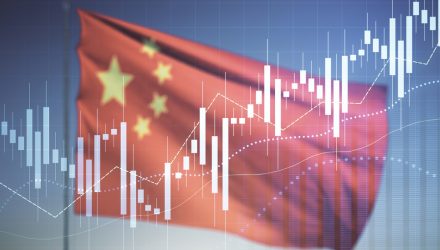 In an otherwise relatively uneventful summer for global stocks, it has been a wild couple of weeks for ‘offshore’ Chinese shares – companies domiciled in mainland China but traded on foreign exchanges. Since July 24, Chinese stocks listed on US exchanges wiped out $400 billion in market value. Given that China is the single largest country weighting in broad emerging markets (EM) indexes, this selloff has become a focus for global investors nervous about this downturn triggering broad contagion in world stocks.

What Triggered the Selloff…and What It Means for Global Stocks?

The catalyst for the selloff has been increased Chinese regulatory scrutiny in certain fast-growing sectors, such as for-profit education, internet, and property management.  We do not expect this regulatory pressure– and the associated uncertainty it brings – to clear up soon, and thus we expect it to remain a drag on Chinese stocks in the near-term. However, we also believe that the issues currently plaguing Chinese shares are generally China-specific, and do not expect China to be the catalyst for a significant broader sell-off in the US stock market. To this end, we would note that over the past week or so, the S&P 500 made another new all-time high even as Chinese indices were plummeting (see chart, above).

RiverFront’s balanced asset allocation portfolios trimmed their weighting in Chinese and broad EM shares from an overweight positioning to slightly underweight back in May, maintaining no direct exposure at all to China in our two shortest-horizon models. We continue to favor US stocks over international equities, with a selection preference within international for European versus Asian shares, including China. 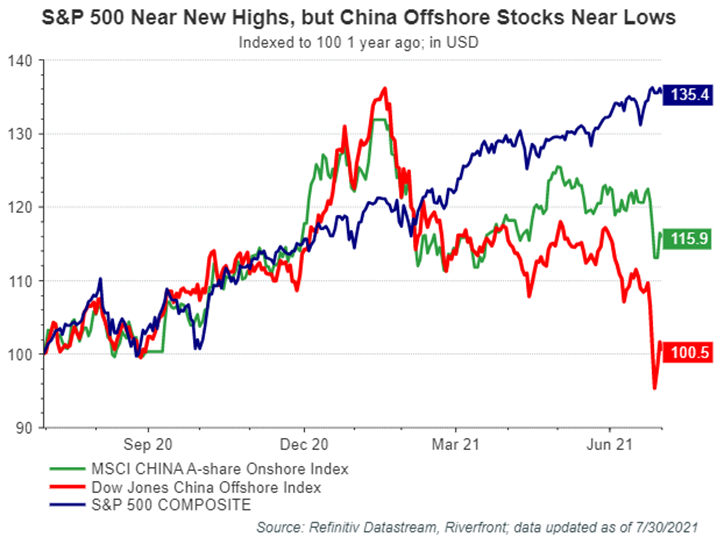 Past performance is no guarantee of future results. Shown for illustrative purposes. Not indicative of RiverFront portfolio performance. Index definitions are available in the disclosures.

On July 24, Chinese authorities released new regulations for ‘for-profit’ education companies. The new regulations include forcing tutoring and education services companies to convert to non-profit status and disallowing foreign curriculums or foreign teachers from teaching remotely in China. This comes on the heels of an ongoing debate among Chinese citizens surrounding tutoring. Many view expensive tutoring as an unfair advantage that helps wealthy students score well on the ‘gaokao’, the Chinese entrance exam crucial for university admittance. These regulations also allow the state to keep a tighter lid on what foreign ideologies are taught to students.

Chinese authorities have also been targeting powerful technology companies that are viewed as monopolies, national security risks, or threats to the social fairness and stability aims of the Chinese Communist Party (CCP). This often affects these companies’ business models and ability to float shares on foreign exchanges. Last month, Chinese ride-sharing company Didi had its mobile app banned over data security issues, just after the firm’s $4 billion US initial public offering (IPO) on the NYSE. Shortly thereafter, Beijing announced a planned review of overseas listings of all Chinese internet companies with more than a million users. Last November, lending giant Ant Financial was forced to suspend their US IPO and change their business model. Other massive internet companies such as Alibaba and TenCent –companies with a large following among Western investors – have felt the wrath of government scrutiny recently, as the state became increasingly concerned with control.

The Chinese state’s recent crackdown has also extended to powerful businesspeople; Sun Dawu, a Chinese billionaire agricultural mogul, was sentenced this week to 18 years in prison. Some China watchers believe the charges against him were largely motivated by Sun’s friendships and ties with political dissidents.

Does this mean that the Chinese government is at ‘war with its own private sector’, as some have suggested? Not exactly…we instead view recent events as a vivid reminder that the overarching aims of communist China have never sat comfortably next to the pursuit of corporate profit. It is clear to us that President Xi and the CCP will continue to prioritize social order over ‘capitalist’ concerns such as return-on-equity or stock prices. These types of moves are designed in part to avoid mass uprising in a nation of 1.3 billion people. China is also increasingly concerned about maintaining state control over homegrown consumer and lending data and access.

We believe that the upshot of this is that high-growth Chinese stocks in sectors that touch or collect data on the Chinese consumer – education, housing, food delivery, lending, and internet commerce among them- are likely to remain on discount. It is not lost on us that ‘offshore’ Chinese public stocks have thus far fared much worse in the sell-off than local-listed China shares (see chart, first page), which suggests to us that the pain being felt in Chinese stock markets is disproportionately borne by international (Western) shareholders in China.

These shareholders going forward may have to continue to assign a consistent ‘uncertainty’ discount to Chinese shares in these areas, regardless of structural growth and profitability prospects. For comparison’s sake, the valuation of the MSCI China stock index – a Chinese index widely-followed in the West, which is roughly a third technology stocks and has behaved similarly in the selloff to pure offshore Chinese indices. MSCI China is currently trading at the cheapest valuation discount – over 13x multiple points – relative to the US bellwether S&P 500 index in 20 years, as judged by trailing year price-to-earnings ratios (see bottom chart, right). However, we think it’s too early to try and ‘bottom-fish’ in these China names, as this uncertainty is unlikely to abate anytime soon. 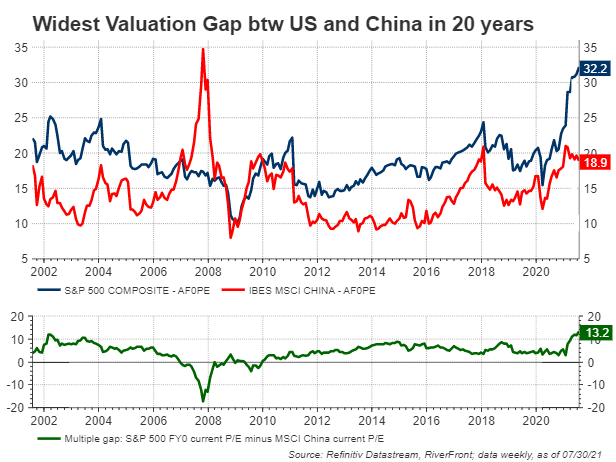 Past performance is no guarantee of future results. Shown for illustrative purposes. Not indicative of RiverFront portfolio performance. Index definitions are available in the disclosures.

Grievances Between the US and China Deepening

In addition to the events of the last couple of weeks, there is a growing laundry list of grievances between the world’s first and second-largest economies. This is epitomized by the trade war of the last few years, the US’s outspoken stance on human rights abuses in Hong Kong and Xinyang, the US probe into the origins of COVID-19, and President Xi’s aggressive rhetoric towards the West during the CCP’s 100-year anniversary celebration of the party’s founding in July.

For the US’s part, the Biden administration seems to be doubling down on former President Donald Trump’s adversarial stance against Chinese tech companies thought to aid and abet IP theft and cyber espionage. While in office, President Trump released a ‘blacklist’ that prevented US investors for owning stakes in roughly 30 Chinese companies due to national security concerns. In June, President Joe Biden added almost 30 more names to the list, including telecom equipment giant Huawei and other large Chinese telecom companies.

In addition, Securities and Exchange Commission (SEC) Chairman Gary Gensler on Friday said he has asked SEC staff to seek specific disclosures from Chinese firms before signing off on pre-IPO filings, according to the weekend edition of the Wall Street Journal. In an extreme scenario, it’s possible that internal pressure in both the US and China could eventually lead to Chinese companies delisting en masse on US exchanges, though for their part Chinese securities regulators tried to downplay these risks in their address to investors on Wednesday.

Conclusion: The New ‘Cold War’ Enters the Next Phase – We Prefer US and European Stocks to Chinese Ones

All of this appears to us as a continuation of the ‘New Cold War’ between China and large Western economies like the US. We first made mention of this new Cold War in our June 2020 Weekly View entitled China, COVID-19, and the New ‘Cold War’. We believe this will continue to put a ceiling on US-listed China shares for the foreseeable future, as Beijing pivots away from a focus on profit maximization towards social initiatives.

Given China’s volatility and increasing government intervention in their capital markets, we think Chinese equity exposure should be limited for some conservative Sustain and Distribute investor profiles. For long-term Accumulate investors, we continue to favor an active strategy, currently preferring US stocks over international equities. Within international allocations, we have a selection preference for European over Asian shares. Within broad emerging markets, investors are forced to weigh the positives of attractive long-term value and leverage to global reflation with these structural risks, though we would note the economies of other Asian countries such as Korea, India, and Taiwan continue to fare relatively well.

The comments above refer generally to financial markets and not RiverFront portfolios or any related performance. Opinions expressed are current as of the date shown and are subject to change.  Past performance is not indicative of future results and diversification does not ensure a profit or protect against loss. All investments carry some level of risk, including loss of principal. An investment cannot be made directly in an index.

The MSCI China A Index captures large and mid-cap representation across China securities listed on the Shanghai and Shenzhen exchanges. The index covers only those securities that are accessible through “Stock Connect”. The index is designed for international investors and is calculated using China A Stock Connect listings based on the offshore RMB exchange rate (CNH).

The Dow Jones China Offshore 50 Index measures the stock performance of companies whose primary operations are in mainland China but whose stocks trade on the exchanges of Hong Kong and the U.S.

To review other risks and more information about RiverFront, please visit the website at www.riverfrontig.com and the Form ADV, Part 2A. Copyright ©2021 RiverFront Investment Group. All Rights Reserved. ID 1745174