China Gets Serious – Tightening the Screws on Rare Earth Elements

As tensions between China and the United States escalate beyond trade, both sides are gearing up for a protracted economic conflict. One sign of that escalation lies in an esoteric part of the periodic table – rare earth elements (REEs).

We’ve written about rare earth elements before, most recently in August 2018. Rare earth elements are small but critical parts of many technological applications, including defense, mobile phones, energy, and automobiles. China controls upwards of 80% of U.S. imports of rare earths, and media reports have hinted that China could restrict supply to the U.S., which would threaten to disrupt the supply chains of many of the United States’ largest companies.

This move by China is a significant escalation in the trade war, as this is one of the areas of high leverage for China due to its dominant position as a producer and the reliance on REEs by the U.S. manufacturing sector in consumer, medical, defense, and energy-related applications.  China’s proposal threatens a critical area of U.S. manufacturing and technology with comparatively low level of economic fallout that would harm China itself. This escalation of trade tensions bolsters our base case scenario of negotiations stretching into at least 2020, subjecting financial markets to episodes of large swings both negatively and positively as negotiations are playing out in headlines and social media. 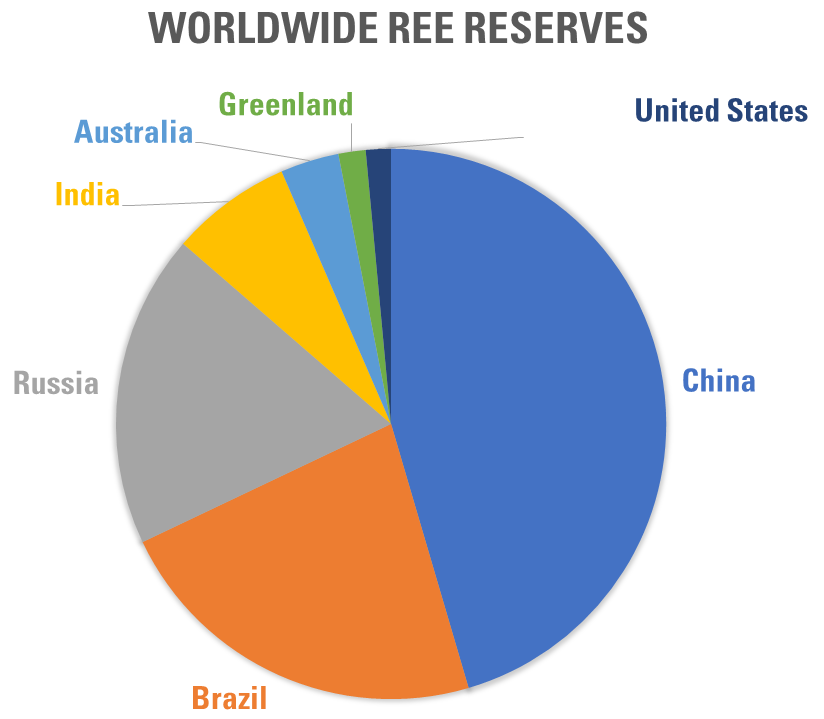 What are Rare Earths?

Rare earth elements are a group of 17 chemical elements on the periodic table that tend to occur together in nature. These metals have many similar properties, and they are often found together in geologic formations, such as coal seams and deposits. They were named “rare earth elements” because most were identified by scientists during the 18th and 19th centuries as “earths,” which were defined originally as materials that could not be changed further by heat and were thus considered to be rare in nature. Contrary to historical findings, REEs are moderately abundant but difficult to extract from surrounding matter because of the way in which they bond freely with one another in minerals and clays. As a result, these natural properties make for a difficult extraction effort involving significant capital investment, time, and adverse environmental chemical processes.

China is the world’s leading producer of rare earth elements, having started production from its coal deposits within inner Mongolia in the early 1980s. Today, China controls over 37% of the estimated worldwide reserves of REEs and currently over 89% of reported global production. As a result, China wields significant power over this critical global supply chain and continues to gain market share. Politics in other countries are also contributing to China’s strength in this area. Recently, Lynas Corporation, an Australian rare earth mining company, is facing the closure of its Malaysia-based Advanced Materials Plant by the Malaysian government. Given that the plant produces 10% of the world’s output in rare earth oxides (REOs), the potential closure of this plant means the second largest REO producer could potentially shut down, thus augmenting China’s power position in this strategic group of industrial commodities. 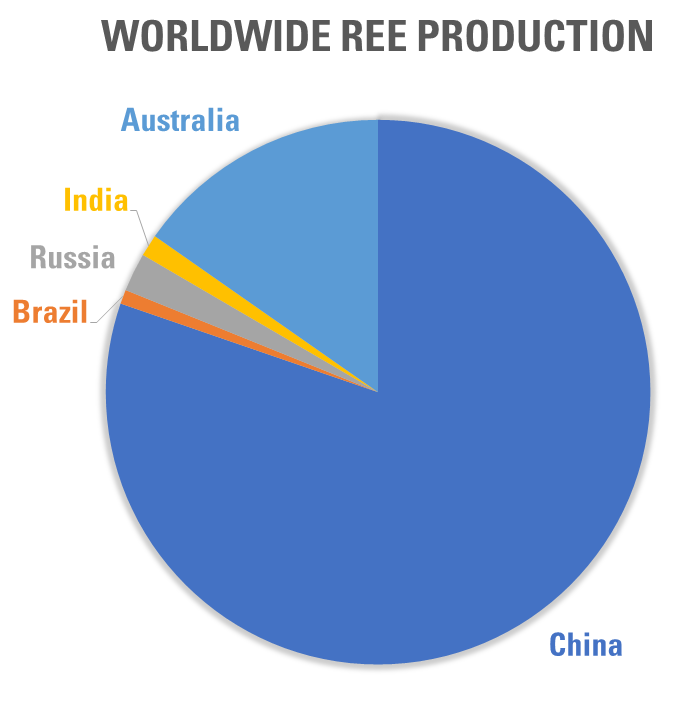 Recent Developments and Implications for Our View

China has the “strong hand” in terms of rare earths and has used it as an economic weapon in the trade war. After the U.S. imposed additional tariffs on Chinese imports on May 10, China responded in kind, but one of the targets of the retaliatory tariffs was interesting. According to Bloomberg, China targeted shipments of rare earth elements used in electric cars from the only U.S. rare earth producer – MP Materials, based in California. China is the world’s largest producer of electric vehicles, and the tariffs will constrict MP Materials’ margins and skew the competitive landscape in rare earth production in favor of China. On May 29, media reports out of China continue to hint at the prospect of a rare earth export restriction against the U.S. in response to the United States’ blacklisting of Huawei Technologies and depriving its supply chain of crucial components from U.S. suppliers. Two days later, on May 31, Bloomberg reported that Chinese officials have readied a plan to restrict REE exports, conditional on a further dispute.

Our base case for trade tensions is a protracted negotiation period stretching into at least 2020. This view is predicated on the fact that the structural issues at play – the United States’ desire to protect its status as the world’s technology hub and China’s need to transition its economy into a value-added producer from a low-cost manufacturer are fundamentally at odds. A restriction on REEs is a significant escalation by China given it’s an area that cuts to a key vulnerability for the U.S. manufacturing and technology sectors and doesn’t have much of a negative effect on the Chinese economy in isolation. We think concerns over sales of Treasuries by China are less likely in the near term, as a disruption in Treasuries could impair the value of China’s USD reserves.

Tail risks abound. The probability of no deal in the form of an indefinite cessation of talks is higher given recent rapid escalation, and financial markets are not priced for a scenario in which that happens. Trade negotiations between the U.S. and China are moving from the realm of diplomacy into an economic war.

All eyes now move to Presidents Trump and Xi’s scheduled face to face at the G20 summit on June 28th, as the stakes continue to march higher.