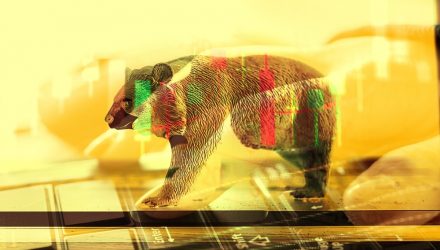 Since the year’s low on October 12th, the S&P 500 has rallied +9% over the course of just twelve days.  Over that twelve day period, the market index has added 5 “outlier days*” to its total for the year.  Statistically, there should only be 5 outlier days out of every 100 trading days, but this is a bear market and bear markets are known for volatility and a higher probability for outliers.

Read articles, watch the news, listen to radio—any of these media mediums have discussed how poor the economy is and has been, while some of our previous market commentaries have highlighted some poor market technicals both in global equities and bonds.  Given this, how did the market rally?

Remember, bear markets are full of quick, sharp fluctuations in both directions.  A few weeks ago, in an update found here, we actually mentioned that one short term indicator was positive.  That indicator was investor sentiment.  The American Association of Individual Investors surveys investors weekly and gauges market sentiment.  The day of the market low, October 12th, the sentiment survey showed that only 20% of investors were bullish, while 24% were neutral, and an astounding 56% were bearish.  That is up there for one of the worst readings ever, which actually made it a positive for the markets.

Here is a quote from our October 4th commentary:

“Investors have felt more bearish at the troughs prior to a rebound, and less bearish as the S&P 500 has gone higher and put in a relative peak…  At the end of the 3rd quarter, pessimism was at its highest level since 2009. This would give an indication of a rally to soon follow. The extent and timing of the coming advance are unknown variables, but when pessimism is at a high, it puts the market in a position to do the opposite of what most would expect, and that is to see a rally.”

So, how exactly is higher bearish sentiment a positive?  Well, long-term it certainly is not positive, but it can often precede short-term rallies.  It boils down to if you are a bearish investor, are you more likely to be long the markets, or more likely to be out of the market or even short the market?  If only 20% of investors were bullish, that would likely mean that there is only a small percentage of investors left to sell, while the other 80% of neutral/bearish investors are all potential buyers.  If bearish investors are in cash or short the market, then a rally in the markets will scare them into “covering their shorts” by purchasing stocks and thus fueling the rally even further, and actually leads to some large “up” outlier days.  This is what is referred to as a short squeeze and is typical bear market behavior.

The FAANGs have Gotten Bit

It has not been much of a “happy Halloween” for Count Dracula, as his precious vampire “FAANG” stocks have taken a hit.  These same stocks are what has carried the US markets significantly higher over the past few years, and as they have done so, become a larger portion of the market’s make up.  At one point, in 2021, the FAANG stocks (Facebook [Meta], Apple, Amazon, Netflix, Google), collectively accounted for 17% of the S&P 500 (that’s 1% of S&P 500 stocks making up nearly 1/5th of the index’s market capitalization).

Canterbury actually produced a video at the beginning of this year, which detailed the meteoric rise of technology and FAANG stocks, and the potential dangers they presented.  That video can be found here.  So far in 2022, the S&P 500 is down -18%.  Those FAANG stocks have contributed heavily to the decline and are down -42% as a collective.  Value stocks, which often exclude stocks in the technology-related sectors, are only down single digits this year.  The market’s largest component has been its weakest one. 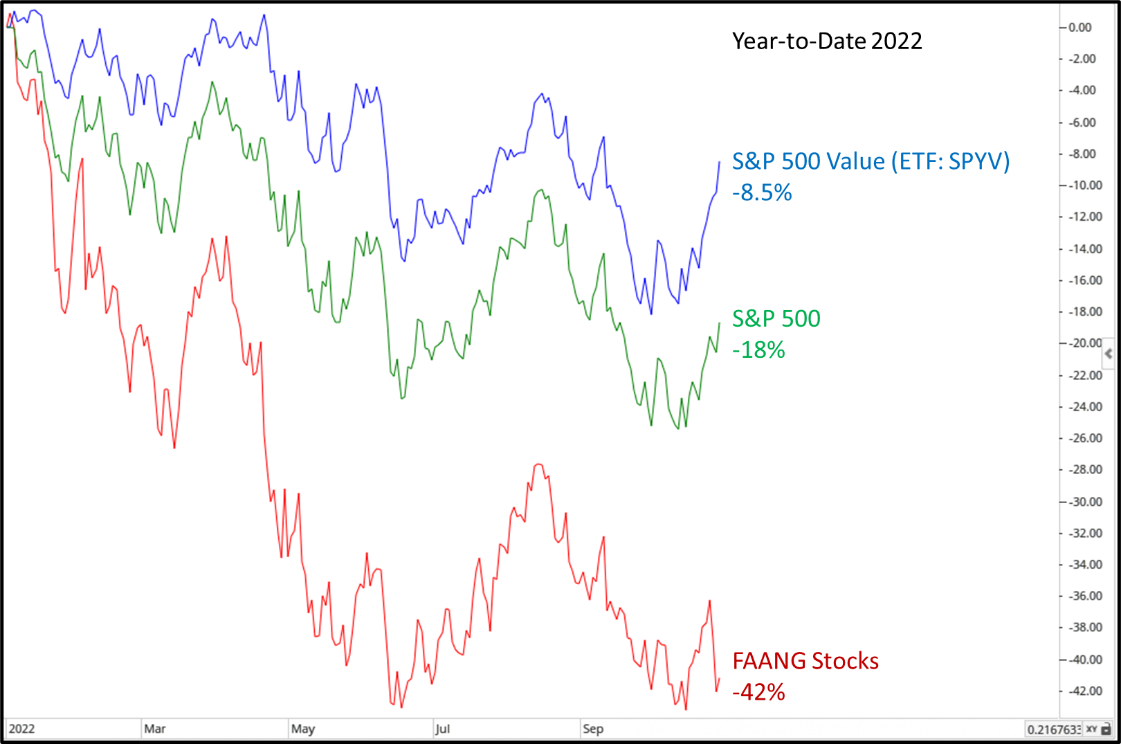 Rallies are common in bear markets.  Bear markets show a pattern of lower highs and lower lows.  So far, that pattern remains intact.  No one knows whether or not we have seen the market’s low, nor do we know when that low will come or if it has already occurred.  What we do know is that volatility is at its highest point since July.  Currently, the Canterbury Volatility Index measures CVI 128.  That is not a bullish sign.

Interestingly enough, this recent market rally has not been led by the previously dominant technology stocks.  Value-oriented sectors have fueled the rally.  You can see this by looking at how much stronger the Dow Jones Industrial Average has been compared to the S&P 500 and Nasdaq over the last few weeks.  Energy stocks are in a bullish Market State, while every other sector remains bearish.  Bear markets are a process, and short-term rallies are a part of that process.

*Outlier Day Definition: Canterbury defines an Outlier Day as any singular trading day beyond +/-1.50%.  We arrive at this definition through empirical study on Market States and bell curve data.  During a Canterbury-defined Bullish Market State (defined using objective, technical indicators), the daily standard deviation of the S&P 500 has been 0.75% dating back to 1950.  Therefore, using bell curve math, a trading day of beyond +/-1.50% (two standard deviations) should occur in 5 out of 100 instances.  During a low volatility, bull Market State, you would expect to see about 13 outlier days in a single year.  During a bearish or transitional Market States, outlier days occur more frequently.