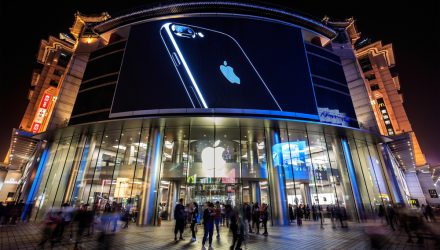 Markets will do whatever they can to confuse the masses. Take last week as an example. Last week, the stock market rose to a new all-time high, fueled almost entirely by the Nasdaq. We have mentioned in almost every update as of recent, that the Nasdaq has been leading the market and carrying it upward off its March lows. In fact, last week’s modest rise in the S&P 500, was pretty much exclusively due to technology-related stocks.

Recently, there has been a slight decline in the Advance Decline Line (A/D Line). The A/D Line measures market breadth, or the amount of stocks advancing versus declining. A healthy A/D Line would show a “rising tide lifting all ships”, meaning most stocks are advancing together. However, a rising market coupled with a falling A/D Line shows that the market is being carried by just a few stocks. In the last 2 weeks, we have seen the A/D Line start to fall off, while the S&P 500 advances. The chart below shows the S&P 500 along with the Advance Decline Line for the S&P 1500 stocks: 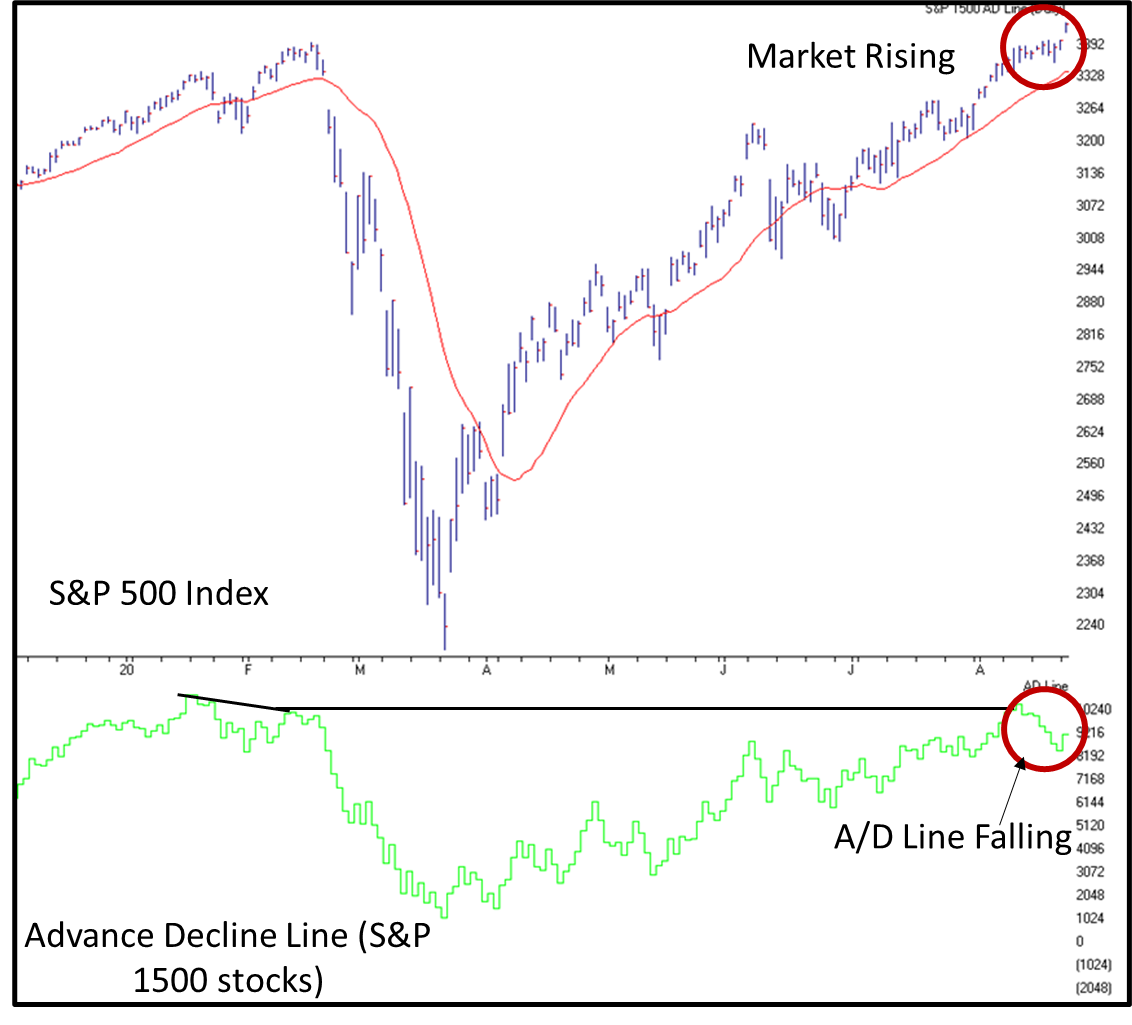 All Eyes on Apple

You may have seen it in the news, but Apple is now officially the first stock to reach the $2 Trillion mark. That is right, Apple’s market capitalization (outstanding shares multiplied by share price) now shows that Apple is worth $2 trillion. Making matters even more historic, Apple now makes up 7.21% of the S&P 500, and 15% of the Nasdaq. In fact, Apple is now larger than the bottom 204 stocks in the S&P 500 combined!  Just last month, Microsoft was the largest S&P 500 company at around 5%, but Apple has quickly surpassed that number.  Apple has had a meteoric, parabolic rise in just the last month. 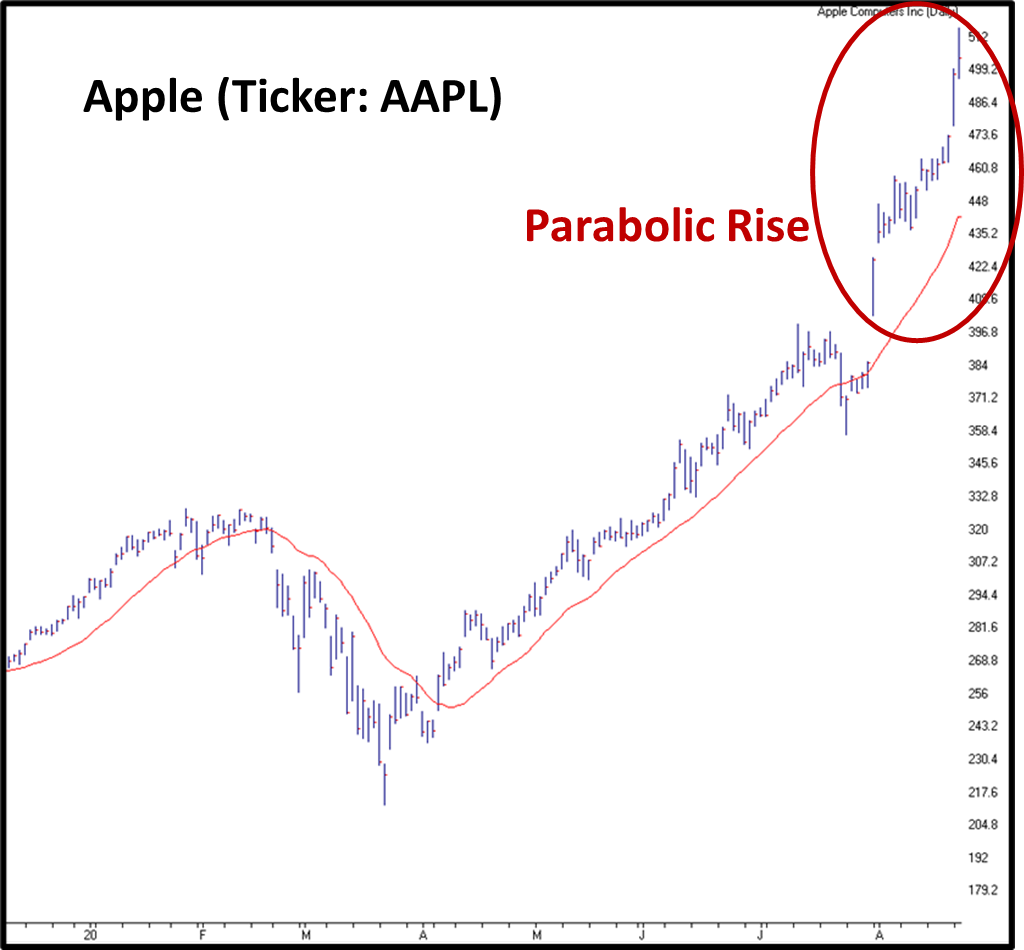 What does this mean? Well, now that Apple holds the largest weighting in both the S&P 500 and Nasdaq, the stocks performance will have a large impact on both indexes. The chart above might be an example of a parabolic advance, which is a sharp, quick, and mostly unsustainable move. In other words, any correction in Apple could lead to a correction in the broad markets.

While we discuss the strength of technology-related sectors, one large sector that continues to struggle is financials.  The Financial sector makes up around 10% of the market, making it the fourth largest sector behind technology, healthcare, and communications (which was formerly a part of technology). Many stocks within the Financials sector have struggled: 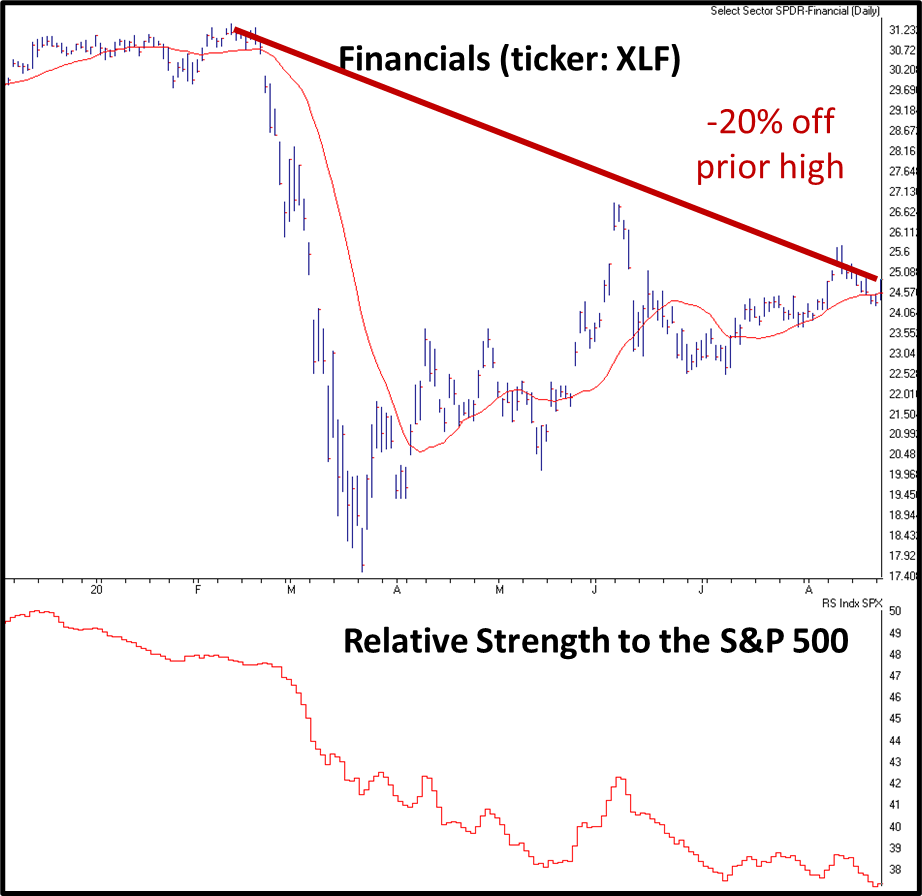 Here is the fun statistic of the day.  We have mentioned previously that Tesla has been parabolic.  Again, there is no telling as to when a parabolic curve will bust.  Tesla continues to rise sharply and defy logic.  Back when it was $750, Elon Musk tweeted that it was overvalued.  Over the next two months, it went to $1650 and is now trading at $2000.  This stock appears to be favored by gamblers, as shown by the average duration at which the stock is being held.  The average shareholder holds an Apple share for about 6 months. (calculated by taking the amount of outstanding shares and dividing that by the average daily volume).  The average holding period for Microsoft is around 10.5 months; Google is over 2 years. Tesla’s average holding period is currently about 10 days.

With Tesla’s share price now being over $2000, when it was just $750 in the spring, shows a parabolic, unsustainable move.  All bubbles will end the same way, with a burst.  For investors buying Tesla today, what would their expectation be for the share price… probably that it would continue to go up.  This kind of euphoric buying can only end one way.  Eventually, there is no one left to buy, and only shareholders to be disappointed and eventually selling, causing an equally sharp drop.  That kind of momentum cannot be sustained. Remember, stocks are not driven by company fundamentals; they are driven by supply & demand, and the psychological, often irrational, emotions of investors.

Technology has led the markets. One concerning development is the recent strength of Apple.  Apple appears to have gotten a bit parabolic recently and is now the largest stock in the S&P 500 by a considerable margin (Apple makes up 7%, while the next closest stock is its competitor, Microsoft, at 5%). All parabolic curves eventually end the same way.  A drop in Apple could lead a drop in the overall markets, especially considering that the markets are currently being carried by technology. There is no telling when this could occur, but it is something to be aware of.  Technology as a whole has been remarkably strong, but if it begins to weaken, the markets will most likely fall, as it is one of the few sectors holding it up right now.