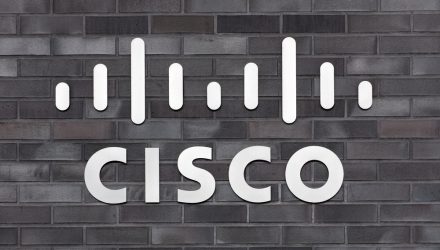 The future of Blockchain is about innovation, and will lead to massive industry disruption. Cisco agrees that the Blockchain is at the core of what they do and could benefit from a network effect. How business data is assimilated and processed, and even how people and clients communicate, is at the core of Cisco, yet embracing Crypto appears to be a challenge. Institutional adoption of Crypto, as measured by the price of Bitcoin and news flow, provides a single metric as evidence that momentum of the benefits of the blockchain are building. Sadly, many companies will remain solely focused on a past way of doing business and fail to innovate for their shareholders. Cisco should not be one of those. Like the past decade, many companies will continue massive buybacks or increases in dividends as a way to return capital to their shareholders. However, technology companies are not banks, and the failure to innovate and embrace disruption will cause failure to capture growth from major paradigm changes. This is part of the reason why technology companies’ focus on returning capital to shareholders so often leads to long periods of underperforming stock prices, corporate restructurings and market share erosion. Cisco needs to embrace risk and align its blockchain efforts with a crypto strategy around its treasury holdings. It is running out of money and needs to align its capital with its business model to gain synergies around achieving the most capital leverage.

To be clear: buybacks, dividends and restructuring can lead to value creation for shareholders. We can see that in the form of the Invesco Buyback Achievers ETF (PKW), which was launched on December 20, 2006. However, note that technology companies that are held are mostly out of favor companies: eBay (EBAY), Intel Corporation (INTC), Oracle Corporation (ORCL), HP Inc (HPQ) and Citrix Systems (CTXS). The fund PKW is reconstituted only in January after searching for those companies that have shrunk their float by 5%.

The free cash flow nature of any technology company with an established dependent client base means that its cash-cow business can provide a steady shareholder capital return strategy. However, growth is why people invest in technology companies. Cisco Systems has reduced its share count from 5.8 billion shares in 2006 to 4.2 billion in 2021, and consistently raised its dividend. In the past 10 years, Cisco has spent about $100 billion towards buying back its stock, and today its stock is not cheap on a historical free cash flow basis. According to Bloomberg, as of July 28, 2012, FYE Cisco’s Enterprise Value/Free cash flow bottomed at 4.8x while today it is 12x. Cisco had an Enterprise Value of $50.752 billion/$10.836 billion in 2012, and today its Enterprise value is $183.577/$14.808 billion. It has a free cashflow multiple of 12.13x. In 2019, Enterprise value was $231 billion, and peak free cash flow of $15.6 billion meant its multiple was about 14.83x. Obviously, hindsight is 20/20, and in 2012 buying low would have made the most sense. Over these past 3 years, Cisco has bought about $40 billion of stock back in the 11-14x multiple free cash flow basis, but demonstrated little progress in taking steps forward toward creating enterprise value like Zoom Video Communications (ZM). Research and Development has stayed steady at about $6.2 billion a year. Moreover, its cash peaked at about $70 billion in 2017, and now stands only at $30.5 billion. Zoom, which today is worth about $126 billion, was founded by Eric Yuan, former vice president of engineering at Cisco who came with the firm’s $3.2 billion Webex acquisition in 2007. What a missed opportunity!! As shown below, the enterprise value in yellow is near a high, while the multiple in green is also near a high. The blue and purple highlight the efficiency of the business model to generate cash flow, but little growth. This is evidence of why buying back more shares at current free cash flow may not make sense; especially versus Bitcoin.

To be fair, Apple (AAPL) and Microsoft (MSFT) have implemented similarly aggressive buyback programs and delivered exponentially better results for their treasury, but all this points out the fact that buybacks require correctly implementing innovation strategies to deliver growth. Microsoft has captured the trend in cloud brilliantly and Apple’s growth has been sustained though multiple segments of its business. Yet, Apple still needs to show more growth and should also buy Bitcoin. See our November article, Apple Should Take a Bite out of Bitcoin as a hedge Against Inflation. Since our article it seems that Apple has launched a strategy to buy crypto through an AP.

Cisco Should Compromise on its Commitment to 50% Shareholder Returns

All this points to a question: In the absence of a strategy to innovate, why is it best that this board continue its stated goal of “returning 50% of its free cash flow to its shareholders in the form of dividends and stock buybacks?” Should the largest networking company know something about the blockchain or incorrectly see the value of crypto? As per the 2018 video, it seems clear that the company does see the value of the blockchain. Cisco is consistently spending about $6 billion a year on R&D. Examples of Cisco’s efforts towards the blockchain can be found on their blog website, which frankly seems to communicate a fair amount of skepticism around crypto, but much optimism around the benefits of the private blockchain. See link for details.

Blockchain and Crypto can be separate use cases, but regardless, it is clear that the Cisco board needs to review the use of their free cash flow, their skunk work mentality around their R&D budget, or perhaps how they allocate their treasury reserves. Like in the case of Apple and Tesla, this is a company who could benefit from a network effect of buying billions of Bitcoin and then offering its clients the ability to use Bitcoin to transact on its private supply chain. Arguably, holders of Bitcoin were effectively granted an indirect discount on Tesla cars when Tesla made the announcement of its $1.5 billion Bitcoin purchase. Cisco similarly could accomplish the same task, except given its B2B supply chain network and R&D budget, the ability to directly affect transactions globally could be made even more frictionless. Note: Cisco has always been a global firm, and 42% of its revenues come from outside the United States where Bitcoin is more widely accepted. See latest report.

If this sounds radical, think through the future 3 years for a company like Cisco. In the next three years, free cash flow of $43-46 billion is expected; this comes after about $18 billion in R&D spending, but before stock repurchase and dividends. Who is to really say what a low growth technology business will be worth in 3 years? Will it be worth more or less than Bitcoin if institutional client adoption of Bitcoin continues? But regardless, when the networking business can be aligned with the principles of the benefits of the blockchain, how is a diversification of your treasury not a prudent decision?

As a footnote – enjoy a little history for context in summary form.

We will be hosting Matt Barkley, an NFL quarterback, who asked to be paid in Bitcoin in 2019. Sometimes it stinks when your future boss doesn’t agree with how they will pay you!