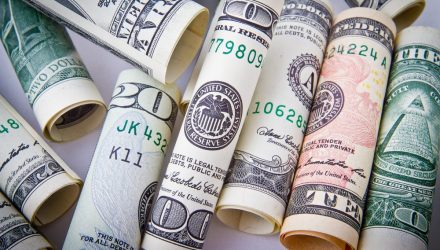 On the other hand, the worst non-leveraged ETPs of the past month include the SPDR Oil & Gas Equipment & Services ETF (NYSEArca: XES) down 11.9%, Teucrium Wheat Fund (NYSEArca: WEAT) down 11.6% and Elkhorn S&P MidCap Energy Portfolio (BATS: XE) down 11.3%.

The month of August started off in relatively languid trading after hitting record highs, with the corporate earnings season coming to an end. Solid economic data also helped maintain the elevated levels as traders looked to new catalysts to keep the bull run going.

However, the equities market were jolted as traders turned risk-off in response to the U.S. and North Korea saber rattling, with President Donald Trump threatening Pyongyang with “fire and fury” if the recluse state takes action. The sudden bout of geopolitical risk was seen as a necessary trigger to lock in the recent gains after markets hit record highs.

Lingering threats from North Korea, though, helped keep risk-on sentiment at bay and continued to pressure U.S. equities. Investors also turned to safe-haven assets like gold and Treasuries to hedge the one in a million chance that the war of words turned to action.