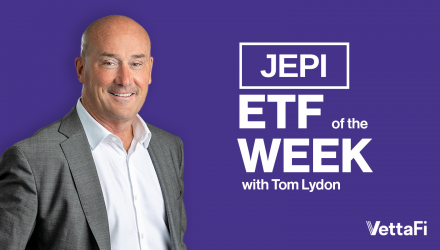 JEPI has the distinction of having appeared on “ETF of the Week” before, but there’s plenty of reason for its repeat performance. Jaffe noted that the pitch for JEPI was so compelling when it last appeared on the show that he ended up adding it into his portfolio.

“It’s kind of like HairClub for Men, you not only talk about it, but you are actually a client as well,” Lydon joked before digging into the things that make JEPI a special fund. According to Lydon, there are plenty of reasons that JEPI continues to garner attention and has attracted billions of dollars.

Managed by JPMorgan, JEPI’s options overlay strategy makes it an income machine. Lydon noted, “The current yield on this ETF is almost 12% — which is crazy — at the same time it does, with its options overlay strategy, protect some of the downside.” Lydon also remarked that JEPI is close to its 200-day average. Despite the downside protection, the nature of JEPI’s construction allows it to participate in the upside as well.

Asked what’s inspiring JEPI’s big inflows, Lydon remarked that tax-loss harvesting is probably helping JEPI, but that this fund has had inflows beyond just that. The Global X NASDAQ 100 Covered Call ETF (QYLD) and the Nationwide Nasdaq-100 Risk-Managed Income ETF (NUSI) are funds that play in a similar space, but JEPI is a hard fund to replace. Lydon believes that these kinds of strategies will continue to garner attention, noting that issuers like NEOS may, as Lydon punned, “bring more options.”

JEPI can be useful for both market optimists and market pessimists, as the upside participation and downside protection pair well together. Lydon added, “After having both equity and fixed income markets down for the first time together for the first time in over 40 years, the prognosis for the future is usually pretty good following a downturn in the equities market.”