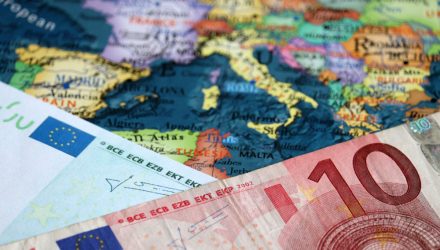 This ETF offers exposure to the equity markets of the EMU member countries: meaning only those who have adopted the Euro. This bloc of nations represents some of the strong economies east of the Atlantic, such as Germany, France, and Italy. This ETF offers exposure to some of Europe’s largest companies as well, including the French energy firm Total SA, and the German conglomerate Siemens AG. From a sector standpoint, this fund does an excellent job of spreading its assets across the board, leaving investors with a healthy diversity when adding this fund to their portfolio. When it comes to countries, however, EZU does carry a bias towards France, Germany, and Spain, who account for the majority of the fund’s asset allocation. This ETF may represent a strong play for investors who are looking to gain exposure to the Euro through an equity structure, or for those who simply believe in these powerhouse economies.

A few reasons, including cheaper valuations. U.S. markets have made a great rebound since the March lows, but now they look pricey relative to other areas. There is also the historic stimulus package. It’s an added helping hand as the Eurozone is already on the road to recovery.

EU leaders agreed on an initial plan of 750 billion euros, or $860 billion. The emergency relief fund will dole out 390 billion euros of grants and 360 billion euros of low-interest loans. The agreement was a historical event as this is the first time member states will underwrite a joint bond issuance.

Some have even likened the moment as the bloc’s Hamiltonian moment, referring to Alexander Hamilton, the first U.S. Treasury Secretary, who had the federal government take on the debts of all U.S. states. The relief fund aims to boost Europe’s economic recovery and allow Italy, Spain, Greece, and others to increase government spending without fear of already high national debt levels. Wealthier northern countries believed that helping these beleaguered countries now was preferable to a potential euro currency crisis later.

Better Outlook Than The U.S.?

For the U.S., there’s the risk of fading fiscal stimulus and election uncertainty. European stocks offered the most attractive regional exposure to varying global reopening. While a growth pickup would benefit emerging markets, Europe’s health infrastructure and policy response to the coronavirus pandemic has left it better placed in the global economy.

New cases in Europe, which was once the epicenter of the virus, have diminished from a peak in April while infections in the U.S. crossed 4 million. Europe’s health capabilities and containment measures position the region for a domestic recovery. Additionally, Europe’s heavy export industry will also capture the improvement in global trade and recovering Chinese economy. The improving outlook has also helped the Euro appreciate to its strongest level against the USD since September 2018.

Listen to the full podcast episode on EZU ETF: