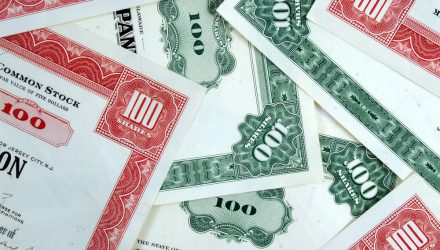 As the markets retreated in a record-setting rout, investors dumped stock exchange traded funds at their quickest pace since the last correction at the end of 2018 and rushed toward safer government bond funds.

According to Bank of America Global Research, investors yanked $47.4 billion out of global stock-focused mutual funds and exchange-traded funds in the three weeks ended Wednesday, the Wall Street Journal reports.

Among the most hated ETF plays over the past week, the Financial Select Sector SPDR Fund (NYSEArca: XLF) saw $2.1 billion in net outflows and Invesco QQQ Trust (NASDAQ: QQQ) experienced $1.5 billion in outflows, according to XTF data.

On the other hand, the iShares 1-3 Year Treasury Bond ETF (NYSEArca: SHY) and SPDR Barclays 1-3 Month T-Bill (NYSEArca: BIL) were among the most popular ETF plays in the past week, attracting $2.5 billion and $1.7 billion in inflows.

The last time the stock funds suffered this much in outflows was during the late swoon in 2018 when investors that the rapid pace of the Federal Reserve’s interest-rate hikes would trigger a recession and a period in 2008 in the midst of the financial downturn.

“This week, we saw what started as an equity-market selloff morph into a much more sinister move in the bond market, which prior to the selloff had been seeing historic inflows,” Tommy Ricketts, a global investment strategist at Bank of America who prepared the fund-flows analysis, told the WSJ. “That suggests that investors have changed from thinking this is a simple equity selloff into something more financial-stability related.”

The massive sell-off mirrored the broader equity market plunge, with three U.S. major indices dipping into a bear market territory, or more than 20% off their recent highs. Meanwhile, investors shifted over to U.S. government bonds for safety, with yields on Treasuries slipping to historic lows as bond prices rallied.

“The outflows have been really staggering,” Collin Martin, a fixed-income strategist for the Schwab Center for Financial Research, told the WSJ. “The environment is so fluid right now and there’s so much uncertainty that it’s tough [for investors]to point to one specific thing and say, ‘The worst is behind us, it’s time to jump in.’”