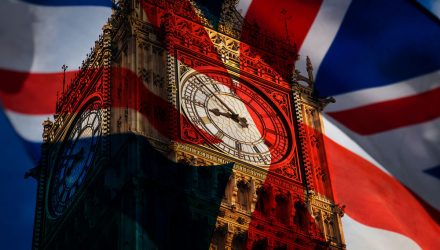 As the United Kingdom grapples with the political uncertainty surrounding the scheduled break from the European Union or the so-called Brexit, investors have been yanking millions of dollars out of the country-related ETF.

Todd Rosenbluth, director of ETF and mutual-fund research at financial-research firm CFRA, pointed out that the iShares MSCI United Kingdom ETF (NYSEArca: EWU) has experienced $396 million in net outflows over the first seven months of the year as the ETF slipped 0.4% over the same period, reports Tanzeel Akhtar for the Wall Street Journal.

Investors have been pulling money out of the U.K.-related ETF ahead of the scheduled March date when Britain will exit the European Union. Domestic political battles over the terms of the exit have intensified, with the resignation of two British cabinet members whom favor a decisive break with the E.U., including Foreign Secretary Boris Johnson and David Davis, the minister in charge of Brexit negotiations.

Credit Suisse strategists also cut its U.K. equities outlook from to benchmark from overweight, citing caution over commodities and expectations that the sterling has experienced most of its decline, Reuters reports.

“The UK market is now overbought: The equity market underperforms 70 percent of the time this happens,” analysts at the Swiss bank said in a note.

Meanwhile, the iShares Currency Hedged MSCI United Kingdom ETF (NYSEArca: HEWU), a currency-hedged U.K. ETF play that tries to reduce the negative effects of a depreciating pound sterling against the U.S. dollar, only had net outflows of $1 million over the first seven months of the year. HEWU has gained 3.9% over the same period as the GBP weakened this year to $1.29.