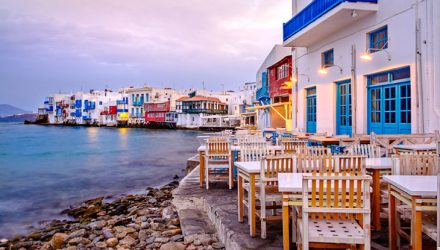 Patience Could be Rewarded With Greece ETF

As of May 26th, GREK had $376.1 million in assets under management. At the end of the first quarter, the ETF held 32 stocks, over half of which hailed from the financial services and energy sectors. Nearly a third of the ETF’s weight is dedicated to consumer discretionary and telecom stocks. Importantly, Greek stocks still reside nowhere near their all-time highs.

“In the past decade, the benchmark Athens stock index has dived from well over 5,000 points to around 780 now. The bourse remains cheap because of the risk that the debt talks will collapse, a prospect that would bring economic chaos and raise the specter of an exit from the euro zone – something that the country only narrowly averted in 2015,” according to Reuters.