You are at:Home»Equity ETFs»Nasdaq ETFs in Focus as Index Aims for Rare Feat 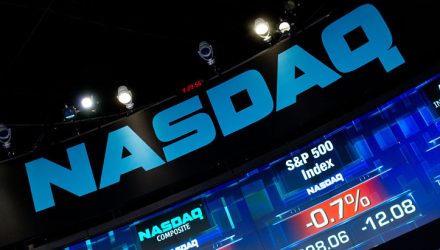 Nasdaq ETFs in Focus as Index Aims for Rare Feat

The Nasdaq Composite keeps pushing toward record highs. That scenario is obviously benefiting the PowerShares QQQ (NasdaqGM: QQQ), which tracks the tech heavy Nasdaq-100, but Nasdaq ebullience could be tested this month.

Since the November U.S. presidential election, technology is the best-performing sector.

“Since 1978, there have been nine seven-month winning streaks for the Nasdaq — what we’ll call a “signal” — the longest ending in February 1983, at 11 months. A year after the last seven-month rally, which ended in May 2013, the Nasdaq was up another 22.76%, according to data from Schaeffer’s Senior Quantitative Analyst Rocky White. In fact, the Nasdaq has been lower at the one-year benchmark just one time — after the aforementioned 1983 signal — but hasn’t moved higher for eight straight months since 1995, with the last three winning streaks capped at seven,” notes Schaeffer’s.