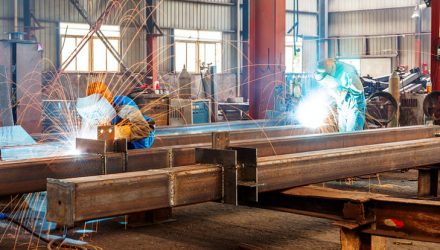 Few exchange traded funds have been as levered to the so-called Trump Trade as the VanEck Vectors Steel ETF (NYSEArca: SLX). The lone ETF dedicated to steel stocks more than doubled last year in anticipation of Donald Trump winning the White House.

However, SLX is scuffling this year as highlighted by a year-to-date loss of 3.4%. SLX tries to reflect the performance of the NYSE Arca Steel Index, which follows global companies involved in the steel industry. Part of the problem are expectations that the Trump Administration will push off its ambitious infrastructure effort until next year.

“A rebound in energy demand, the benefits of trade protection and possible increases in infrastructure spending are expected to offset a modest decline in automotive production and result in better capacity utilization and margin expansion for the North American steel industry, according to Fitch Ratings. The increasing likelihood of a rebound in import competition and a delay in addressing infrastructure spending has resulted in a tempering of earnings expectations compared with the fourth quarter of last year,” according to Fitch Ratings.