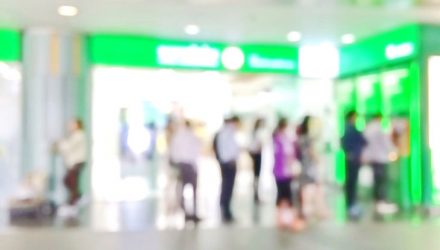 Investors: Be Careful With Bank ETFs in June

Already struggling this year, the Financial Select Sector SPDR (NYSEArca: XLF), the largest exchange traded fund dedicated to the financial services sector, could be confounded this month by some unfavorable seasonal factors.

The financial services sector, which is locked in an intense battle with healthcare for the second spot in the S&P 500 behind technology, is historically one of the worst-performing sectors in the month of June. As for XLF, it is usually the worst performer among the nine original sector SPDR ETFs in the six month of the year.

“Specifically, the Financial Select Sector SPDR Fund (XLF) is one of the worst-performing exchange-traded funds (ETFs) in the month of June, according to data from Schaeffer’s Senior Quantitative Analyst Rocky White. The average June XLF loss over the past 10 years is 3.4%, with the ETF positive just 20% of the time,” reports Schaeffer’s Investment Research.

XLF and other financial services exchange traded funds have spent ample time in the spotlight this year as the Federal Reserve raised interest rates in March and due to speculation that the Trump Administration could deliver reforms that could bolster the sector.