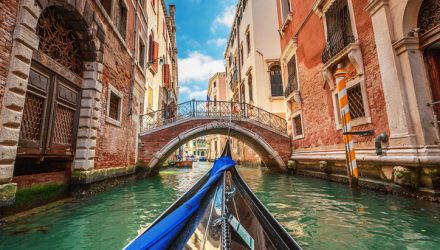 Political risks across the North Sea are also diverging as Eurozone political risks have eased following the French election, whereas the U.K. election that was previously considered a forgone conclusion until last week now looks less certain.

Furthermore, the economic outlook in the U.K. is being weighed by concerns over the sustainability of consumer spending while the outlook in the E.U. is more upbeat.

“This is one area where the contrast with continental Europe is very strong,” Isabelle Mateos y Lago, Chief Market Strategist at the world’s largest asset manager BlackRock, told Reuters. “It’s hard to quantify how serious, but we’ve already seen that since the Brexit referendum, UK consumers have been drawing down their savings to an all-time low savings rate.”

Alternatively, investors who believe the euro currency will continue to weaken and are bullish on the Eurozone’s outlook can turn to currency-hedged ETF options, such as the the Deutsche X-trackers MSCI EMU Hedged Equity ETF (NYSEArca: DBEZ), iShares Currency Hedged MSCI EMU ETF (NYSEArca: HEZU) and WisdomTree Europe Hedged Equity Fund (NYSEArca: HEDJ). These currency-hedged Europe ETFs may outperform non-hedged Europe funds if the euro continues to depreciate against the U.S. dollar.