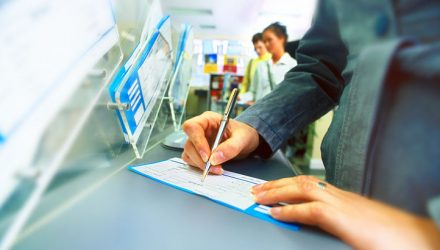 The Financial Select Sector SPDR (NYSEArca:XLF) and rival financial services exchange traded funds have recently been in rally mode. In the case of XLF, the largest ETF tracking financial services stocks, that ETF is up nearly 4% over the past week following positive results from the Federal Reserve’s Comprehensive Capital Analysis and Review (CCAR) and the related stress tests.

Those results are expected to foster increased share buybacks and dividends from plenty of well-known XLF constituents, but some investors worry that the sector still faces challenges related to the Fed’s monetary policy.

With a steepening yield curve or wider spread between short- and long-term Treasuries, banks could experience improved net interest margins or improved profitability as the firms borrow short and lend long. Although the Fed has raised interest rates twice this year with another rate hike likely coming before the end of 2017, there are concerns about the central bank’s dovish tone and its impact on ETFs such as XLF.

A challenging interest rate and lending environment “threaten to drag on banks’ performance in coming months, a potential counterweight to the higher dividends and share buybacks many banks announced last week, reports Telis Demos for the Wall Street Journal. “In the second quarter, growth in business lending fell to its slowest pace since spring 2011. Long-term interest rates remain close to historically low levels, despite an uptick in the last week of June. And market volatility remains subdued, resulting in muted trading activity.”