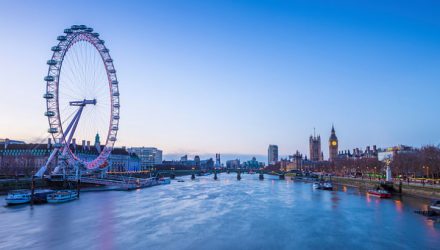 On Thursday, global stocks contended with the European Central Bank (ECB) meeting and the U.K. heading to the polls, each of which could have been tricky events to navigate for Europe exchange traded funds.

U.K. Prime Minister Theresa May said she will try to forge a government after a snap-election gamble that cost her Conservative Party its parliamentary majority.

The Vanguard FTSE Europe ETF (NYSEArca: VGK) was mostly steady in U.S. trading yesterday, though it notched a modest loss. VGK is the largest dedicated Europe ETF trading in the U.S. Investors should note VGK is not a dedicated Eurozone ETF as highlighted by its hefty weights to the U.K., Switzerland and some Nordic countries.

“VGK — which tracks major European markets — has skyrocketed more than 24% since its mid-November low near $45, peaking at $56.99 on June 2 — its highest point in nearly two years. Much of that advance stems from a bull gap in late April, as global stocks breathed a collective sigh of relief after the French elections. The surge pushed Vanguard FTSE Europe ETF shares above a trendline connecting lower highs since 2014, per Schaeffer’s Senior V.P. of Research Todd Salamone, and VGK recently hit $57 — the target for the inverse head-and-shoulders breakout that occurred in the first quarter, when the exchange-traded fund moved above $50.50,” according to Schaeffer’s Investment Research.

VGK “is one of the cheapest and best-diversified funds in the Europe stock Morningstar Category. The portfolio is made up of nearly 1,200 stocks across the market-cap spectrum from 16 developed countries in Europe, representing 98% of the investable market,” said Morningstar.