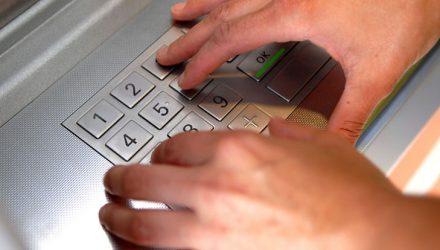 Only the energy sector is performing more poorly this year than financial services, a theme weighing on dedicated bank exchange traded funds, such as the PowerShares KBW Bank Portfolio (NASDAQ: KBWB).

KBWB, home to more than $759 million in assets under management, tracks the widely followed KBW Nasdaq Bank Index. That index “is a modified-market capitalization-weighted index that seeks to reflect the performance of companies that do business as banks or thrifts that are publicly-traded in the US. The Index is compiled, maintained and calculated by Keefe, Bruyette & Woods, Inc. and is composed of approximately 24 companies representing leading national money centers and regional banks or thrifts,” according to PowerShares, the fourth-largest U.S. ETF sponsor.

Investors in ETFs such as KBWB continue hoping the Federal Reserve will boost interest rates again this year, something bond markets expect could happen this month. Higher interest rates would help widen the difference between what banks charge on loans and pay on deposits, which would boost earnings for the financial sector.

“Specifically, while the S&P 500 scored a new all-time high on Friday, the KBW Bank Index (BKX) closed more than 10% away from its 52-week high. According to our research, it was just the 9th such (unique) divergence since the inception of the BKX in 1992,” reports ETF Daily News.