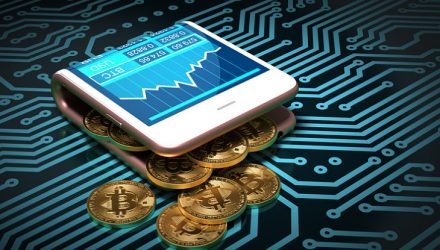 An ETF That Jumped on the Bitcoin Craze

An exchange traded fund focused on disruptive companies was the first to add bitcoins, a form of cryptocurrency, to its portfolio and the move is paying off as the digital currency rallied in recent weeks.

The ARK Web x.0 ETF (NYSEArca: ARKW) was the best performing non-leveraged ETF over the past month, increasing 16.5%.

ARKW is an actively managed ETF that focuses on disruptive companies that help transform the market and was the first ETF to invest in bitcoins after the portfolio manager acquired publicly traded shares of Grayscale’s Bitcoin Investment Trust (OTCQX: GBTC).

ARKW’s original exposure to GBTC was only 0.3% of its overall portfolio, but now, the Bitcoin Investment Trust is the largest single component in the active ETF, making up 8.8% of the overall portfolio after it surged 270.9% over the past month.

GBTC, which is quoted on the over-the-counter market, buys and sells bitcoin with a standard brokerage account in the U.S. and is structured as an open-end trust. The Bitcoin Investment Trust, though, has jumped after anticipation that Grayscale Investments, a firm run by tech entrepreneur Barry Silbert, could raise $500 million in an IPO for its flagship fund. The Trust, which could IPO in October, has since increased its IPO size to $1 billion.