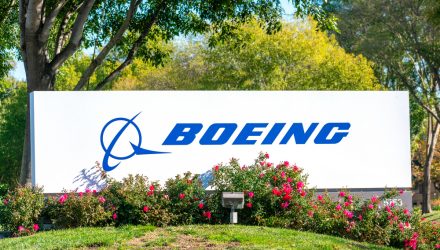 The Invesco Aerospace & Defense ETF (PPA) is trading slightly lower over the past week.

“Demand for intelligence, surveillance, and reconnaissance missions could increase, along with demand for unmanned systems, missiles, and satellite capabilities,” reports Al Root for Barron’s.

Home to 54 stocks, the $702.5 million PPA tracks the SPADE™ Defense Index. That index “is designed to identify a group of companies involved in the development, manufacturing, operations and support of US defense, homeland security and aerospace operations,” according to Invesco.

Confirming it has more than adequate leverage to a potential uptick in demand for military products and technology, PPA allocates over 14% of its weight to Raytheon Technologies (NYSE: RTX) and Lockheed Martin (NYSE: LMT), with General Dynamics (NYSE: GD) and Northrop Grumman (NYSE: NOC) combining for another 10%.

Furthermore, many PPA components are rated favorably by analysts. Plus the stocks aren’t expensive.

“The largest defense stocks still trade at a discount to the market. Lockheed trades for 13 times estimated 2022 earnings,” according to Barron’s. “Analysts like defense stocks. The lowest Buy-rating ratio for any of those six stocks is 60%. The average Buy-rating ratio for stocks in the S&P 500 is about 55%. Raytheon and Northrop are Wall Street favorites, with more than 80% and 70%, respectively, of analysts covering the company rating shares Buy.”

The one to watch, however, may be Boeing (NYSE: BA). The Dow component, which was the subject of the Barron’s cover story last weekend, does have substantial defense exposure, but it’s also heavily engaged in commercial aircraft.

Boeing, PPA’s third-largest holding, recently turned profitable for the first time in two years and is garnering approvals from a slew of countries to resume commercial flights using the controversial 737 MAX jet. Barron’s speculates that the stock could jump 35%.