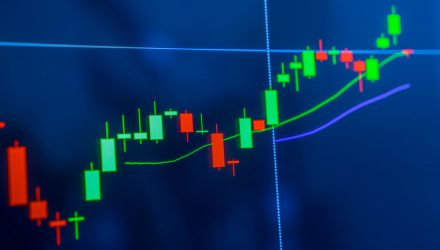 On its own, the nearly 17% (as of June 7) returned by the Invesco S&P Smallcap 600Pure Growth ETF (NYSEArca: RZG) this year is impressive.

However, when RZG is measured against its value counterpart, the Invesco S&P SmallCap 600 Pure Value ETF (RZV), the small cap growth exchange traded fund pales in comparison. RPV is higher by almost 33%.

In other words, RZG is in a similar place to large cap growth funds. It’s not down on the year; it’s merely trailing value rivals. Pinpointing what’s “ailing” the $138.6 million RZG in 2021 isn’t difficult.

In theory, RZG’s 22.47% weight to consumer cyclical stocks should be advantageous. After all, the Invesco S&P SmallCap Consumer Discretionary ETF (PSCD) is higher by 49.56% year-to-date – a performance well in excess of large cap consumer discretionary indices.

What’s hindering RZG is tech – a theme seen with large cap growth funds – and healthcare, which takes on a growth feel in the small cap space. Those sectors combine for 36.44% of the fund’s weight, according to issuer data.

RZG has a 3.88% energy weight while stablemate RZV devotes 9.85% to that sector. Last month, the best-performing small cap growth sector was materials, but RZG only has a 1.31% weight to that sector. With RZG, if consumer cyclicals don’t carry the day, the burden shifts to healthcare and tech, and it not hard to see why the fund was sluggish last month.

“Drilling down to the industry level, groups within healthcare and technology dragged performance down more than others,” adds Solberg. “Biotechnology lost over 12% in May alone, and solar power saw losses of nearly 32%.”

Bottom line: RZG is being restrained by the growth-to-value rotation. However, it’s still been able to cobble together a decent showing this year, and there are still signs of optimism for small-cap tech and healthcare names. RZG tech holdings have the potential to deliver revenue growth in the back half of the year as demand for chips and electrical components increases.

As Morningstar’s Solberg notes, much of the damage to small cap growth healthcare names in May was inflicted by a small number of stocks, none of which reside in RZG. Additionally, this segment could be boosted by biotechnology consolidation.