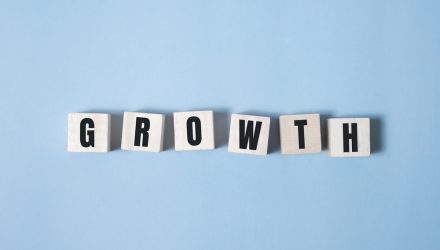 In fact, RPG could prove useful as 2021 moves along because low interest rates are helping companies spend capital on, well, growth. Many that are doing just, including some RPG components.

“S&P 500 cash to asset ratios are at record highs and policy uncertainty has continued to fall,” according a Goldman Sachs note cited by CNBC. “We We expect investing for growth (capex, R&D, cash M&A) will continue to represent the largest share of wallet.”

Some of the big spenders will come from the technology sector, which accounts for almost 40% of RPG’s weight, more than double its second-largest sector weight, which is healthcare.

RPG tracks the S&P 500 Pure Growth Index, which aims to include companies with the “deep growth” classification, meaning the fund is even “growthier” than traditional funds dedicated to this factor.

The growth score “is measured using three other factors: three-year sales per share growth, the three-year ratio of earnings per share change to price per share, and momentum (the 12-month percentage change in price),” according to Invesco.

Some well-known firms are planning significant capital spending this year and that fuel upside for RPG.

“Many major companies are opening up their wallets as much of the pandemic hit is now in the rearview mirror. For example, Apple, Intel and Walmart have all announced substantial new spending plans to facilitate future growth, Goldman noted. The Wall Street firm estimated a 19% rebound in S&P 500 companies’ cash use this year, up from 10% growth previously forecast,” reports CNBC.

For some companies sitting on large stockpiles of cash, there could be an impetus to spend, and do so soon in preparation of taxes rising. If the Biden Administration gets its wish and is successful in closing some corporate tax loopholes and raising levies on big business, companies may rein in spending, particularly on share buybacks and research and development, in anticipation of higher tax bills.