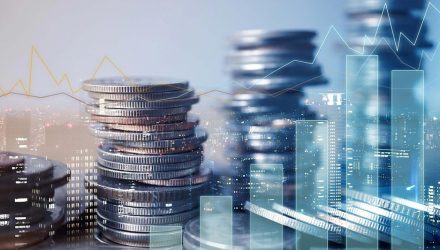 February was a turbulent month for equities, and the start to March is anything but sanguine amid Russia’s invasion of Ukraine. However, there are some factor-based strategies that can help investors survive and potentially thrive.

“While the S&P 500 started the month on the front foot, up 1.6% at one point, risk appetite dramatically waned following Russia’s invasion of Ukraine and the subsequent sanctions by NATO allies, leading to the U.S. benchmark losing 3% in February. High Beta and Pure Value were the only two factors to finish February with gains, but almost every factor index outperformed,” according to S&P Dow Jones.

RPV’s year-to-date showing could be a sign that value is gaining momentum, and that the factor could be in for a decent stretch of out-performance over its growth rival.

“Besides the spectacular drops suffered by some of the mega caps, the month’s other highlight was Value’s continued outperformance: it is having its best start to the year against both Growth and the S&P 500 since records began in the mid-1990s, outperforming Growth by 9.5% year-to-date. An important driver of Value’s outperformance has been sector tilts,” adds S&P.

As the research firm notes, sector attribution is contributing to value’s run this year with the energy and industrial ranking as two of the best-performing groups. Those sectors combine for over 13% of RPV’s roster, according to issuer data.

Interestingly, RPV is impressing in the first quarter despite its underlying index having low correlations to the equivalent low volatility and quality benchmarks, which are two factors that should be working well in the current environment.

Still, RPV has some quality attributes, as highlighted by a combined 21.57% allocation to healthcare and consumer staples stocks. None of the fund’s 124 holdings exceed a weight of 2.27%, but the largest component is Warren Buffett’s Berkshire Hathaway Inc. (NYSE:BRK-B), which is up nearly 9% this year.