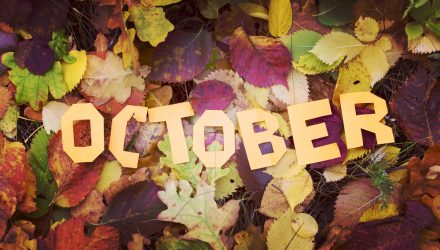 In financial market terms, October has a dubious reputation, but the S&P 500 jumped 8.13% last month. That could be a good sign, particularly with seasonality turning favorable. If a year-end rally shows further signs of materializing, investors may want to evaluate exchange traded funds such as the Invesco QQQ Trust (QQQ) and the Invesco NASDAQ 100 ETF (QQQM). Those funds gained 4% in October, indicating that some market participants need more convincing regarding a growth stock resurgence.

On the other hand, there is some good news for investors in the form of valuation. QQQ and QQQM, which sport the same lineups, are typically home to richly valued stocks. Today, however, many high profile members of the ETFs’ portfolios are discounted relative to historic norms.

“September’s losses brought stock valuations back to the year’s lows, with the S&P 500 trading down to approximately 15x next year’s earnings,” according to BlackRock research. “While valuations dipped below these levels in early 2020 and late 2018, the post-COVID market premium has been eliminated. On a global basis, valuations have also mean-reverted and are now slightly below the long-term average. Sticky inflation and an aggressive Fed can result in more multiple compression, but most of the adjustment has probably taken place.”

Adding to the near-term case for QQQ and QQQM is seasonality. While seasonality alone isn’t a reason for investors to load up on aggressive fare, it’s worth noting that equities typically perform well in the latter stages of the fourth quarter.

“Seasonality’s impact is often exaggerated but it is not irrelevant. This year September more than lived up to its poor reputation. While October can be volatile, the final quarter of the year is generally supportive for stocks. Since 1987 Q4 has been the best periods for equities, with the S&P 500 posting an average monthly price gain of approximately 1.5%,” added BlackRock.

With an eye toward 2023, perhaps the biggest challenge facing QQQ and QQQM is earnings quality of the ETFs’ member firms. Recent reports from some of the funds’ big names disappointed, but if that situation improves in 2023, QQQ and QQQM could rebound.

“Despite a historic tightening campaign and surging prices, the U.S. economy has proved remarkably resilient. While investors are realistic enough to discount some additional slowing, it’s not clear that earnings estimates reflect a full-blown recession. Under this scenario, even with steady valuations markets can move lower,” concluded BlackRock.