You are at:Home»ETF Education channel»Low-Volatility ETF Chock-Full of Hideout Plays 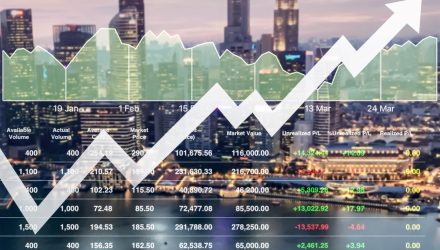 As was widely documented last week, the technology sector is slumping to start 2022. One week doesn’t determine how that sector, or any other, will perform over the course of the year, but with technology’s status as the largest group in the S&P 500, it’s understandable that plenty of investors are pensive early in 2022.

A predictable response to that phenomenon is for some market participants to embrace low-volatility fare and exchange traded funds such as the Invesco S&P 500 Low Volatility ETF (SPLV). While that may seem like a knee-jerk response, there are some credible reasons to consider SPLV today.

SPLV follows the S&P 500 Low Volatility Index, which is a basket of the 100 least volatile members for the S&P 500 based on trailing 12-month volatility. To be precise, SPLV currently holds 102 stocks, and several have established track records of proving sturdy when tech names slump. CNBC recently screened for S&P 500 member firms that hold up well when tech declines.

“CNBC Pro then looked at the performance of every company in the S&P 500 during the losing tech months and found the stocks with the best average performance. We threw out any stocks that dropped more than 5% during any of those single months,” reports Maggie Fitzgerald.

Not surprisingly, some consumer staples names appear on the list, and that works in favor of SPLV because the ETF allocates 21.12% of its weight to that sector. The SPLV staples names on the CNBC list are Dow component Procter & Gamble (NYSE:PG) and Hershey (NYSE:HSY). Those are SPLV’s largest and fourth-largest holdings, respectively, combining for 2.67% of the ETF’s roster.

“Chocolate company Hershey rose an average of 6.1% and Procter & Gamble gained an average of 5.8% in the most recent periods of tech weakness,” according to CNBC.

Insurance company Arthur J Gallagher & Co (NYSE:AJG), which accounts for almost 1% of SPLV’s weight, is the lone financial services name on the CNBC list. Dollar General (NYSE:DG), 0.94% of SPLV’s roster, is the only consumer cyclical name on the list.

Not surprisingly, a pair of utilities names — Consolidated Edison (NYSE:ED) and NiSource (NYSE:NI) — are also on the list. Those are also SPLV member firms. Utilities, which is consistently one of the least volatile sectors, is SPLV’s second-largest sector exposure at almost 20%.

“Utilities companies NiSource and Consolidated Edison also earned spots on CNBC Pro’s list. The pair rose an average of 1.9% and 0.3%, respectively,” when tech dropped, according to CNBC.