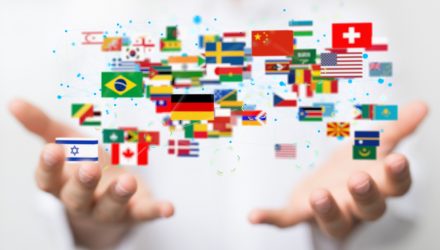 International Exposure Not as Bad as It Seemed

Due to the dollar being one of the best-performing currencies in the world this year and Russia’s war against Ukraine, among other factors, investors are rightfully leery about stocks of companies with significant international revenue exposure.

Many of those names hail from growth sectors, such as communication services, consumer discretionary, and technology, meaning that exchange traded funds, including the Invesco QQQ Trust (QQQ) and the Invesco NASDAQ 100 ETF (QQQM), have some international revenue sensitivity at the holdings level.

Fortunately, the earnings outlook isn’t as bleak as previously expected for companies with substantial ex-U.S. exposure.

While second-quarter earnings season is still in its early innings, the above data points could be encouraging with reports looming from marquee QQQ and QQQM components. The two Invesco ETFs both track the Nasdaq-100 Index (NDX), meaning their portfolios are identical.

On Thursday alone, Apple (NASDAQ:AAPL) and Amazon (NASDAQ:AMZN), which combine for nearly 20% of the ETFs’ weights, will report earnings. Intel (NASDAQ:INTC), another QQQ and QQQM holding, will as well. Those reports could test the notion that internationally exposed companies have the potential for earnings surprises.

The potential hurdle for growth-oriented assets in terms of international revenue is that the bulk of that top-line growth is coming from the energy sector, to which QQQ and QQQM have no exposure. However, even when Exxon Mobil (NYSE:XOM) and Chevron (NYSE:CVX) are stripped out, the earnings and revenue situations aren’t as dire as previously expected.