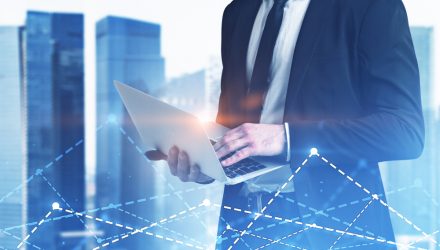 As has been widely documented, some mega-cap tech growth stocks are taking beatings this year, but the silver lining is a slew of high-quality stock names are now seeing discounts.

That could spell opportunity with exchange traded funds such as the Invesco QQQ Trust (QQQ) and the Invesco NASDAQ 100 ETF (QQQM). Both ETFs track the Nasdaq 100 Index (NDX), which is currently littered with once-beloved growth stocks trading at compelling multiples.

A prime example of that trend is Google parent Alphabet (NASDAQ: GOOG). The dominant name in internet search, Alphabet also has a booming cloud computing business, among other growing, desirable units.

“We believe Google will continue to gain traction in the cloud market, with annual revenue growth expected to be 27% until 2026. Meanwhile, revenue from Google Play Stores, sales of hardware products, and non-ad YouTube segments is expected to be flat for the rest of the year. Is that why the stock’s so cheap?,” opined Morningstar analyst Andrew Wills.

Part of the reason Alphabet shares are inexpensive at the moment is the increasing fear that a recession is likely to be a drag on digital advertising spending, which is a major source of revenue for the company. That’s likely one reason why rival and fellow QQQ/QQQM components Facebook parent Meta Platforms (NASDAQ: META) is sagging this year, too.

Historically, economic contraction weighs on advertising budgets – digital and otherwise – but that doesn’t change the fact that this is still a growing arena for Alphabet.

“The market might be discounting Alphabet’s advertising business, which makes up 70% of revenue. But when it’s expected to grow 15% this year, to a quarter-trillion by 2023? We can’t expect a typically cyclical tech stock,” added Willis.

The two share classes of Alphabet stock are the fifth- and sixth-largest holdings, respectively in QQQ and QQQM and combine for 7% of the ETF’s rosters. Meta Platforms, the company with the next most exposure to digital advertising trending, is the number seven component in the ETFs at a weight of 2.78%.

Adding to the case for Alphabet is its growing cloud unit, which can offset some of the weakness in more cyclical parts of the company.

“Keeping up with our regular cloud storage payments has probably become as important as maintaining our mortgages or rent payments. Year to date, however, investors have been neglecting to pay for Alphabet stock (GOOG)–the parent company of search engine Google – all while the company racks up gains in the fast-growing public cloud market,” concludes Willis.