You are at:Home»ETF Education channel»Expect More Biotech Consolidation Activity in 2022 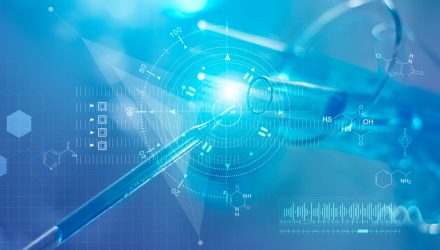 The biotechnology industry is often a hotbed of mergers and acquisitions speculation. Announced deals are a different matter altogether.

This year’s pace of biotechnology deal-making was decent, and with many blue-chip pharmaceuticals and mature biotechnology companies armed with massive amounts of cash, consolidation in the space could increase next year. That could benefit exchange traded funds, including the Invesco Nasdaq Biotechnology ETF (IBBQ).

IBBQ, which debuted last June, tracks the widely followed Nasdaq Biotechnology Index (NBI). Home to 265 stocks — one of the most expansive lineups among all biotech ETFs — IBBQ’s roster features both potential buyers and sellers.

“So far in 2021, a total value of $89.9 billion of M&A deals over $100 million have been announced, which is only 44% of the amount recorded in 2020. Deal activity in the sector declined since September, with 10 new deals put forward in the fourth quarter compared with 23 announced in the third quarter,” reports Bloomberg.

Amid fears that Congress will pursue lowering prescription drug prices and concerns that the Federal Trade Commission (FTC) will more heavily scrutinize biotechnology takeovers, among other factors, equities in this group are slumping this year, with small- and mid-cap names enduring heavy punishments.

However, there’s some silver lining for IBBQ. Regulatory threats appear to be ebbing, and the drug price reduction agenda may not be as wide-ranging as previously thought. It might not even come to fruition. Plus, the aforementioned slump experienced by many biotech stocks is depressing valuations, potentially making targets more attractive to suitors.

“SVB Leerink recently put the biopharma industry’s cash and debt capacity at more than $1.6 trillion by the end of next year. Analyst Geoffrey Porges highlighted ‘the steady buildup of cash within large-cap biopharmas, especially those benefiting from an earnings windfall due to sales of Covid vaccines and treatments,’ and called out vaccine stocks Pfizer Inc., BioNTech SE and Moderna Inc.,” according to Bloomberg.

Moderna (NASDAQ:MRNA) is IBBQ’s fourth-largest holding at a weight of 6.46%. BioNTech (NASDAQ:BNTX), Pfizer’s coronavirus vaccine partner, accounts for 2.04% of the IBBQ roster.

On Monday, Pfizer (NYSE:PFE) announced that it’s acquiring Arena Pharmaceuticals (NASDAQ:ARNA), a small IBBQ component, for $6.7 billion. That’s a modest deal by industry standards, but one that stokes hopes that more of the same will be on the way in 2022.