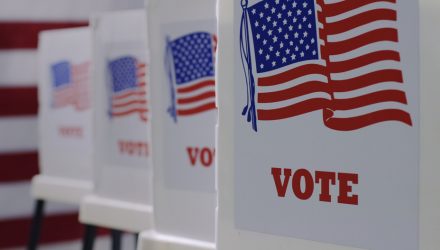 Election Outcomes Could Spark Near-Term Gains for These ETFs

Tuesday, November 8 marks the arrival of the most anticipated midterm election in recent memory. Perhaps in U.S. history.

While it could be a few days before the results of all the hotly contested races are known, some market observers are speculating that if Republicans make gains in both houses of Congress, that could be good news for risk assets.

Some experts are focusing on potential price action immediately following Election Day, indicating that if electoral results are to the market’s liking, exchange traded funds such as the Invesco QQQ Trust (QQQ) and the Invesco NASDAQ 100 ETF (QQQM) could be in for some near-term upside.

“U.S. stocks are likely to enjoy an “impressive rally” this week as Republicans could take at least one chamber in the midterm elections, predicts the chief executive of one of the world’s largest independent financial advisory, asset management, and fintech organizations,” according to deVere Group.

QQQ and QQQM both track the Nasdaq-100 Index (NDX), meaning these are growth-heavy, tech-heavy ETFs. Those haven’t been the corners of the market to be involved with this year owing to persistent inflation, which is forcing the Federal Reserve to aggressively raise interest rates.

Some market participants view that as the result of massive government spending, indicating that a change in congressional complexion after Election Day could be to the near-term delight of investors holding ETFs such as QQQ and QQQM.

“History teaches us that a sitting president’s party sheds some level of power during these elections, splitting the executive and legislative branches of the U.S. government,” notes deVere Group CEO Nigel Green. “This typically results in gridlock as lawmakers are unable or unwilling to agree on major legislation, meaning that substantial laws are either not approved or significantly reduced in scope and impact.”

While a dividend government could be what investors are looking at post-Election Day, it’s worth remembering that a dividend government arrived following the 1994 midterms and what followed was one of the most storied multi-year runs on record for the Nasdaq-100 Index. Today, that index is home to far more quality companies.

“Reforms to legislation on big tech can be expected to come to a halt due to the gridlock, which represents upside for the tech stocks,” according to deVere. “Pharmaceutical and biotech stocks could also capitalize on a Republican wave, as Democrats are pursuing a bill to lower prescription drug prices. Meanwhile, energy stocks could be boosted should Republicans take at least one of the chambers because a windfall tax on oil producers proposed by Democrats is likely to be blocked.”

Biotech names are the bulk of the healthcare exposure found in QQQ and QQQM.