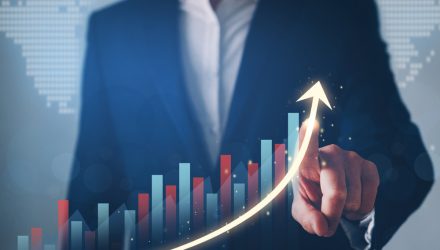 After ranking as one of 2021’s best-performing asset classes, commodities are impressing again in the early stages of 2022.

That’s a boon for a variety of exchange traded funds, including the Invesco DB Commodity Index Tracking Fund (DBC). The tape doesn’t lie. DBC is up almost 12% year-to-date, while the S&P 500 is lower by 7.57%. Over the past year, DBC, which tracks the DBIQ Optimum Yield Diversified Commodity Index, is up more than 40% — a jaw-dropping performance compared to the 11.91% returned by the S&P 500 over the same span.

While that stellar run by DBC might imply that upside from here is limited for commodities, some market observers pose the opposite argument, waxing bullish on the asset class.

“We reiterate our view of the advantages of adding commodities to a portfolio in the current environment,” said Goldman Sachs in a note to clients published on Monday. “Not only are commodities a geopolitical hedge, they are also an inflation hedge, and a hedge against valuation risk from shifting central banks reaction function.”

Goldman is constructive on gold and oil, among other commodities. That view is relevant to investors considering DBC because the Invesco ETF allocates about a quarter of its weight to Brent and West Texas Intermediate crude futures contracts and 7.42% of its weight to gold.

Gold is coming off a disappointing year in 2021, which caught many market observers by surprise, given persistent increases in the Consumer Price Index over the course of the year. However, the yellow metal is showing signs of life to start 2022, as the largest gold-backed ETF is higher by 2.72% over the past week.

Another reason to consider DBC over the near term is the specter of a hostile act by Russia against Ukraine, which could send energy commodities prices soaring.

“Russia’s Foreign Minister Sergey Lavrov has reportedly told Russian President Vladimir Putin that the Kremlin should pursue a diplomatic route to obtain concessions from the West, according to Reuters. The report follows comments from U.S. National Security Advisor Jake Sullivan on Friday that an invasion ‘could begin at any time,’” reports Pippa Stevens for CNBC.

Overall, DBC features exposure to the futures contracts of 14 heavily traded commodities. Energy commodities represent over 56% of the ETF’s roster, while precious metals, including gold, and agriculture commodities combine for 31.41% of the fund’s weight.