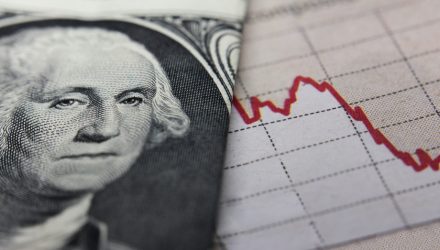 The Invesco DB Commodity Index Tracking Fund (DBC), one of the most widely followed commodities exchange traded funds, fell 1.16% last week and is 9.63% below its recently set 52-week high.

That’s nearly correction territory, but in some better news for DBC, some experts believe that a commodities supercycle is still afoot and that the recent pullback in the asset class is a buying opportunity for investors.

“The Bloomberg Commodity Index (BCOM), home to oil, gas, industrial metals such as copper and aluminum, and grains such as soybeans and wheat, fell as much as 9% from a multiyear high of $132.63 hit on March 8. Driving the drawdown has been optimism that a peace deal between Russia and Ukraine could be reached soon, which would reduce the likelihood of more restrictions on Russian commodities, freeing up the global supply,” reports Jacob Sonenshine for Barron’s.

Much of the recent retrenchment in the commodities complex is attributable to selling pressure on oil. That’s relevant in the DBC conversation because the fund devotes over 24% of its weight to Brent crude and West Texas Intermediate futures contracts. Those are the ETF’s largest and third-largest holdings, respectively.

Bolstering the case for DBC is that some experts believe the pullback in commodities is healthy, normal, and merely the symptom of upside that may have accrued too rapidly in 2021.

“That’s partly because the pullback from this year’s gain in commodities looks like more of a pause from the gains that happened too quickly, not because the outlook for commodity prices is truly dimming. For the year through Feb. 25, the index gained 13%. Then, it gained just over that in only a few weeks when it reached its early March high. So the brief decline this week makes sense, wrote John Roque, market technician at 22VResearch,” according to Barron’s.

Additionally, many of the factors that drove commodities prices higher remain in place. Some, namely inflation, are getting worse. As for oil and natural gas, there’s still potential upside there because resolution for Russia’s war with Ukraine doesn’t appear imminent.

“The Russia situation isn’t exactly going away soon, as Russia hasn’t made any concrete decisions to capitulate to western countries’ wishes for peace. That indicates that western countries could still be compelled to shy away from buying Russian commodities,” notes Barron’s.