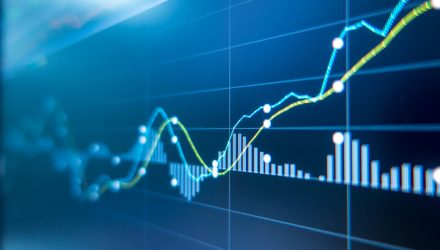 Call on KBWB for Buyback-Rich Stocks

After the major domestic banks passed the Federal Reserve’s annual stress test with flying colors earlier this year, the central bank took the handcuffs off when it comes to shareholders.

Last year, the Fed forced banks to set cash aside for bad loans amid fears that the coronavirus recession would be long-lasting, stymieing banks’ plans for share repurchases and dividend growth. That recession was brief by historical standards, and, now flush with cash, banks are growing shareholder rewards in significant fashion.

That’s a plus for an array of exchange traded funds, including the high-flying Invesco KBW Bank ETF (NASDAQ: KBWB). KBWB, which tracks the KBW Nasdaq Bank Index, is up 31% year-to-date and is becoming a hub of buyback activity.

Last week, buybacks in financial services stocks hit the highest levels seen since 2010 and flirted with records as percentages of market value, according to Bank of America.

“Buybacks by corporate clients accelerated from the prior week to the highest level since mid-March, driven by Financials,” says Bank of America strategist Jill Carey in a note. “Financials has now overtaken Tech as the sector with the largest dollar amount buybacks so far this year.”

Alone, increasing buyback activity is a positive for KBWB because removing shares from the market can increase a company’s earnings per share. However, there are some favorable historical trends to consider, too.

“Based on our flows data from 2010 to today, we have found that the S&P 500 sector buying back the largest dollar amount in a given week have tended to outperform over the next several months with a >50% hit rate,” according to Bank of America.

Confirming the ascent of financials in the buyback game, the sector is the largest sector weight in the NASDAQ US BuyBack Achievers Index with an advantage of more than 300 basis points over technology.

“Year-to-date corporate client buybacks across sectors are +49% y/y but still far from pre-COVID levels: -14% vs. 2019 at this time, and one of the weakest years post-crisis so far when normalized by market cap,” adds Bank of America.

The $2.84 billion KBWB holds 25 stocks with Wells Fargo (NYSE:WFC), Bank of America (NYSE:BAC) and Dow component JPMorgan Chase (NYSE:JPM) combining for a quarter of the fund’s roster. Not surprisingly, nearly three-quarters of KBWB components are classified as value stocks.