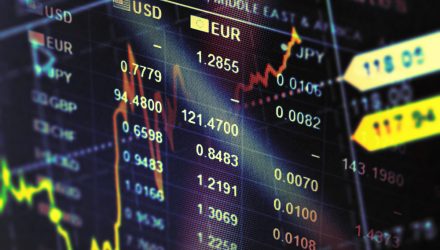 U.S. companies are sitting on massive amounts of cash, and with equities slumping in the first quarter, some of those firms could look to allay investors’ concerns by signaling that there’s value in those shares by unveiling share buyback programs.

That could put a spotlight on exchange traded funds, including the Invesco BuyBack Achievers ETF (NASDAQ: PKW). PKW benchmarks to the NASDAQ US BuyBack Achiever Index, and the fund is relevant today because it appears as though companies are capitalizing on lower share prices to repurchase stock.

Alone, that’s noteworthy because S&P 500 companies have a lengthy history of buying back their own shares after lengthy run-ups and not doing much buyback activity during weak markets.

“They appear to be taking advantage of the volatility that has rattled markets lately. Stocks have come under pressure this year on worries about the pace of the Federal Reserve’s plan to raise interest rates, Russia’s invasion of Ukraine and a surge in commodity prices that could stall the economy,” reports Hardika Singh for the Wall Street Journal.

In just the first two months of this year, the combined value of buyback efforts announced by S&P 500 member firms is a staggering $238 billion, according to Goldman Sachs, and that doesn’t include previously initiated buyback plans that are ongoing.

“Repurchases can support stocks by reducing a company’s share count, boosting its per-share profit. And they can boost investor sentiment by suggesting executives are optimistic about their companies’ prospects and confident in their financial position,” according to the Journal.

There’s something to the notion that companies that are aggressive buyers of their own shares can outperform those that are not. Year-to-date, PKW is beating the S&P 500 by more than 360 basis points.

Enhancing the allure of PKW is its methodology. It’s enough for a company to announce a major buyback initiative and expect to be included in the NASDAQ US BuyBack Achiever Index. To gain entry into that index, a company must reduce its shares outstanding tally by at least 5% over the trailing 12 months. Translation: PKW components are credibly reducing shares outstanding counts. Given 2022 buyback projections, it’s possible that more stocks join PKW as the year moves along.

“Goldman analysts recently raised their 2022 forecasts for buybacks to a record $1 trillion, which would represent a 12% increase from last year when repurchase activity helped propel the S&P 500 to a 27% gain,” notes the Journal.