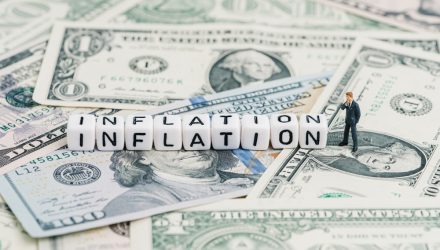 Inflation is commanding plenty of attention, and rightfully so, with much of the conversation revolving around which assets will be vulnerable to an extended period of rising consumer prices and which ones could prove durable.

Bank stocks and exchange traded funds, such as the Invesco KBW Bank ETF (NASDAQ: KBWB), belong in the durable camp. Up almost 41% year-to-date, KBWB is clearly benefiting from a previous spike by 10-year Treasury yields and talk that the Federal Reserve is likely to boost interest rates next year. Higher bond yields mean better net interest margin (NIM) spreads for lenders, and that means elevated profitability, which could serve as a buffer against inflation.

“US banks are in good shape to maintain their profitability through the current period of elevated inflation, which in our base case will subside in 2022 but settle a little above 2%, on average, long-term. But if high inflation persists beyond this time frame, the potential for credit negative responses by banks will rise,” according to Moody’s Investors Service.

For KBWB investors, the above is positive because while banks’ profitability isn’t always highly correlated to inflation, those financial institutions with significant interest rate exposure are often repudiated by investors in high inflation environments.

That scenario is unlikely to repeat because, as the Federal Reserve’s recent stress tests indicate, domestic banks are on sound financial footing. Plus, the average market capitalization of KBWB components is $122.78 billion, confirming that it’s a large-cap ETF with no exposure to small, speculative financial services firms that could be pinched by extended inflation.

As Moody’s notes, higher inflation doesn’t necessarily mean that banks will have to set aside more capital to cover bad loans. The variable in that scenario is the Fed not raising interest rates too rapidly. It appears that won’t happen, since markets are pricing in one rate hike next year and a gradual pace of tightening from there. For KBWB, there could actually be some benefits in an inflation/modest rate tightening scenario.

“Further, if rising inflation leads to higher interest rates but does not weigh on the ongoing expansion, that will unlock the value of banks’ huge core deposit franchises, a boost to profitability,” concludes Moody’s.