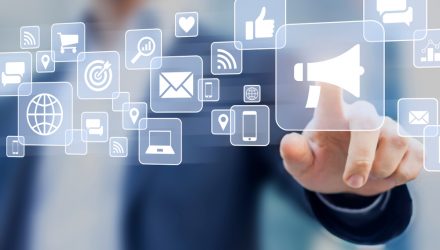 Currently, the iPhone is the company’s dominant revenue generator, accounting for $40.7 billion of $83 billion in sales in the most recently reported quarter, but Apple has its eyes on mobile advertising, and some analysts believe that’s an arena in which the tech giant could make a splash.

Citing data from research firm eMarketer, Martin noted that online advertising should approach $600 billion this year, of which $405 billion could be assigned to mobile venues. Those are impressive figures when considering that amid a volatile macroeconomic climate and increasing recession jitters, some companies are reining in advertising spending.

Apple’s ability to introduce a demand side platform, which is a software-based program that allows buyers to purchase ads with the help of automation, is integral to its mobile ads pursuits. That’s relevant to QQQ and QQQM investors because both ETFs allocate 13.26% of their respective weights to the iPhone maker. That’s nearly 300 basis points more than is assigned to the ETFs’ second-largest holding — Microsoft (NASDAQ:MSFT).

“If it builds a DSP, Apple can control how and where its data gets used,” Martin said. “And can prevent data leakage outside their ‘Walled Garden.'”

Owing to the iPhone, iPad, and other products, mobile advertising is a natural market for Apple to target, and with its vast cash resources, it’s an arena in which the company could rapidly go from contender to champion. Of course, that’d be a long-term benefit to QQQ and QQQM investors.

“Virtually all time spent by consumers on Apple devices is on mobile,” Martin said. “Therefore, we expect Apple to target the global mobile advertising market.”

Supporting the analyst’s view is the point that Apple has 1 billion unique users and 1.8 billion active users around the world.