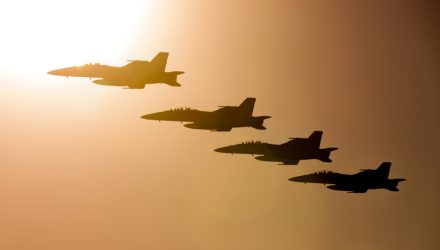 Amid Russia-Ukraine Conflict, PPA Powers Up

Some asset classes are more responsive to geopolitical strife and war than others. Gold and the U.S. dollar come to mind, but some corners of the equity market benefit as well.

Not surprisingly, aerospace and defense equities are on that list. Just look at the performance of the Invesco Aerospace & Defense ETF (PPA). PPA, which tracks the SPADE™ Defense Index, is up 8.74% over the past week and higher by almost 11% over the past month, indicating that it’s an ideal equity-based player on Russia’s invasion of Ukraine.

Analysts believe that the conflict in Eastern Europe will unlock a new spate of defense spending, which could extend the rally recently notched by PPA.

“As we think about the events that unfolded last week in Eastern Europe, there has been a tectonic shift in geopolitical stability,” Bank of America’s Ronald Epstein said in a note on Tuesday. “Europe has not seen anything like this since WWII and the U.S. and its NATO allies now have to focus on managing escalation along Russian borders.”

The $703.7 million PPA holds 53 stocks, including titans of the defense industry Lockheed Martin (NYSE:LMT), Raytheon (NYSE:RT), and Northrop Grumman (NYSE:NOC). That trio combines for about 21% of PPA’s roster, according to Invesco data.

Bank of America is bullish on General Dynamics (NYSE:GD) and L3Harris Technologies (NYSE:LHX) — two stocks that combine for nearly 11% of PPA’s roster. As CNBC notes, Bernstein analyst Douglas Harned likes the aforementioned Lockheed Martin, which is PPA’s largest component at a weight of 7.36%.

“We like Northrop Grumman’s position with two of the three legs of the nuclear triad,” Harned said. “With Putin’s language regarding Russia’s nuclear arsenal, we expect Congressional support for these programs to be reinforced.”

Investors are gradually revisiting PPA on the back of the Russia-Ukraine conflict. Since February 24, the Invesco fund has taken in $8.17 million in new assets. PPA also has the right methodology. Over the past three years, the ETF is up nearly 33%, easily outpacing the Dow Jones U.S. Select Aerospace & Defense Index while being less volatile than that benchmark over that period.