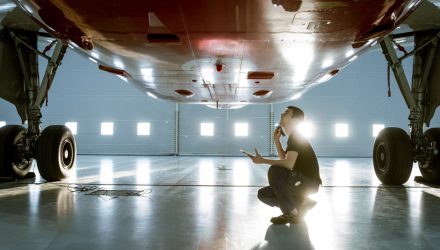 Geopolitical conflict often stokes upside for aerospace and defense stocks, and Russia’s invasion of Ukraine is having that predictable impact.

Check out the Invesco Aerospace & Defense ETF (PPA). That exchange traded fund is higher by 7.16% over the past month, which is a period that’s been a trying time for the broader market. Some experts see more upside potential for PPA components.

“Russia’s attack on the Ukraine sparked a global humanitarian and political crisis. But S&P 500 investors are still finding ways to engage in defense companies helping nations defend themselves in a world torn by war,” reports Matt Krantz for Investor’s Business Daily (IBD). “Investors have already posted $49.7 billion in stock gains on the 32 major defense and aerospace stocks.”

PPA, which tracks the SPADE™ Defense Index, holds 53 stocks in weights ranging from 0.36% to 7.86%. The situation in Ukraine could stoke a renaissance of sorts for defense equities, which have long trailed the S&P 500.

The conflict could compel other smaller countries in Eastern Europe to up defense spending. Additionally, some NATO members, including the U.S., could boost defense spending in an effort to support countries that could be vulnerable to hostilities from China or Russia in the future. Should that elevated spending materialize, it could be a boon for PPA member firms.

In the case of Maxar, that stock is up more than 40% since Russia instigated war with Ukraine.

“That gain alone added $799 million in market value for investors. But even so, analysts think this stock still has more than 14% upside until hitting its 12-month price target of 40.75. Additionally, the company is seen making 54 cents a share (or more than $41 million in profit) in 2022, snapping many years of losing money,” according to IBD.