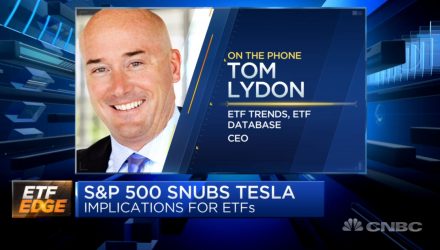 This week, shares of Tesla opened at an amount 15% down from Friday’s closing price. One of the reason stems from the company’s snub from the influential S&P 500 Index.

ETF Trends CEO Tom Lydon, along with Andrew McOrmand of Wallachbeth Capital, joined CNBC host Bob Pisani on this week’s “ETF Edge” to discuss is going on here. As Lydon begins, it’s important to note that Tesla is the tenth-largest company in the US, which stands out given how the S&P is generally devoted to the biggest companies.

Lydon is sure to point out that the S&P Index 500 is an actively managed index. Their committee decides who gets in or is removed from the index. Important criteria is a positive earning for four consecutive quarters but doesn’t guarantee inclusion.

As Lydon explains, “I think the S&P, right now, is playing defense. Many investors, advisors, and institutions are looking for indexes like the Nasdaq 100 that are a little more modern in nature and will take into account more forward-thinking companies. But, they didn’t want to take a gamble on Tesla, and that would have been a big move for them, which has put them under some scrutiny.”

Sales of regulatory credits to other automakers brought in $1 billion, which was twice it’s net profits. Many had bet on Tesla being included in the index, which some estimated would have generated close to $50 billion of new buying by those tracking the index (which has a $370b Market Cap).

McOrmand also notes how he’s seen many rules-based-only investment strategies not do to well in this kind of environment, speaking to the ways older models have affected decisions. At the same time, as it is just a “pause to look at Tesla,” that does not mean the company will never make it onto the index; it just may be a matter of time.

As Lydon points out, many ETF investors looking to participate in the next group of FAANG or New Economy stocks are looking to the Nasdaq 100 that include companies like Zoom, Docusign, Moderna, which are also not featured in the S&P 500.

To be speculative as to why Tesla specifically wasn’t included, the group agrees that volatility may have been a factor. Lydon adds that FAANG and Microsoft represent 28% of the S&P, and investors have been very happy with what those have added.

However, Lydon also notes, “Going forward, investors, especially index investors, hope that they’ll also have a piece of those future FAANG stocks. When we see instances like Tesla, which is such a big company, not included, that concerns me.”