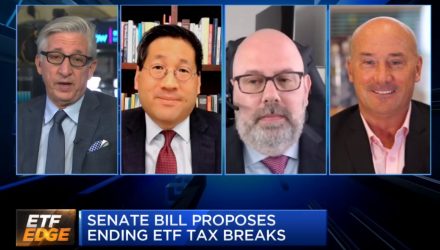 On this week’s episode of CNBC’s “ETF Edge,” host Bob Pisani wants to discuss how the tax wars have made their way over to ETFs. ETF Trends’ CEO, Tom Lydon, is on hand to go over the potential impacts of Senate Finance Committee Chairmen Ron Wyden’s new tax on ETFs’ bill pay. Also featured in this episode are Investment Company Institute’s Eric Pan and American Century’s Ed Rosenberg.

Looking at this new measure, it would stop investors from avoiding capital gains on so-called “in-kind transactions,” which allow traders to swap underlying assets without producing capital gains. They essentially help manage investor portfolios. This is an advantage of ETFs, but now it has the potential to be cut off.

Helping to fight back, Pan explains the nature of in-kind transactions and the tax rules of the past that have worked alongside the nature of ETFs. The issue, currently, is how Senator Wyden wants to make these transactions taxable. The problem is that it comes off as a punishment for the investor, which Pan believes to be unfair.

“This is dangerous,” Pan states. “Today, many people are interested in the markets. We want people to invest for the long term. So, Senator Wyden is actually going to make it more expensive for these people to stay for the long term, and that has real consequences.”

In addition to Wyden’s new measure, President Biden wants to boost the capital gains rate and apply it to households. For Lydon, this is not good news for Wall Street. With that in mind, he also points out how Biden has promised no new taxes for households that make under $400K a year. That means that the 92% of households (and there are 12 million households in the US that own ETFs) that make less than $400K that were ensured protection may now have to worry about losing that protection if this measure goes through.

Rosenberg adds, “In smaller funds, it’s not that bad, but as you go to the larger funds, they’re trying to manage their tax laws to keep gains at a minimum or at zero. There could be a lot more selling that goes on to build up losses in the portfolio. What it does is it changes how a portfolio manager in the ETF space is going to have to manage ETFs going forward if something like this goes through.”

Lydon goes on to explain how ETFs haven’t had to deal with some of the same things that mutual funds have, which has been great. However, with the new proposed measure looking to put the progress made with ETFs in jeopardy, Lydon can at least see the work done to rally around preventing this from happening as the industry has come together to push back.

Hear More of What Tom Lydon Had to Say on the ETF Edge Podcast: