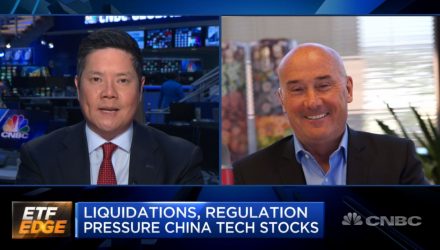 Last week featured a massive liquidation by hedge fund Archegos Capital Management and concerns over rising regulatory risks in the U.S., causing plenty of drama in the realm of Chinese tech. The KraneShares CSI Chinese Internet ETF (KWEB) took a real beating as well, with official repeating concerns about inflated stock prices and other concerns. All of this will affect the various Chinese ETFs.

As far as how the ETF industry has been tested during all of this, Lydon explains how the Chinese market has been holding on pretty well. A lot of volume has led to accelerated trading. There has been no stall on trading, and some of the key things for investors to think about now concern the long-term. Understanding if some of the companies factoring into this area of the market will still be around in 5-10 years means having a way to recognize certain pressure with the U.S.

The SEC’s new commissioner will be instrumental in enforcing new accounting standards, making sure newer companies adhere to the books, and keep in mind various changes. There’s also scrutiny over in China, with attempts to keep those in control of their market from making further moves.

Still, as Lydon also states, “These are some of the best companies in the world, and will continue to prosper in the years to come.”

Looking at the current state of the market and where the most interest is, following this Chinese sell-off, Mazza chimes in to note how many ETFs from Direxion cater to traders, with the intention of being really directed toward short-term exposure. Recently, there has been money moving toward areas that have been previous winners, such as semiconductors and biotech. In these instances, there’s a lack of reversal, even though they come well off their high in the short term.

This shows a need to keep an eye on how things will proceed with investor behavior. Still, people are doubling down on these investments that have worked really well for the time being.

For Ahern, when it comes to KWEB and seeing whether investors are going to buy into the dip, there are many more non-shareholders than shareholders, which is showing people who want to get exposure to quality names.

“We were just coming out of the earnings season for KWEB companies to simply fantastic earnings across the board,” Ahern explains. Due to the revenue, he believes people will “buy the dip.”

He continues, “I think for the medium to long-term, with China being three-quarters removed from their quarantine and with the work-from-home companies still generating these fantastic financial results, it just shows why investors should have exposure there.”