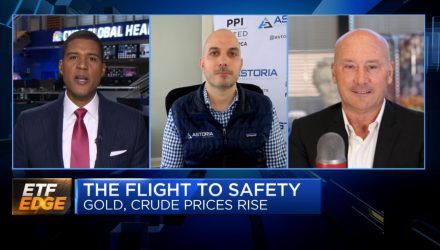 ETF Edge: The Renewal of Travel and Leisure ETFs

Looking further into the reflation trade, on “ETF Edge,” CNBC’s Frank Holland gets into ETFs being powered by renewed flows into travel and leisure ETFs. The easing of COVID restrictions across the globe has opened up some narratives that suggest these sectors will be regaining some steam.

Looking closer at leisure and entertainment, funds such as the Invesco Dynamic Leisure & Entertainment ETF (PEJ) have all led the charge of 5%-10% higher just over the past week. As rates rise, investors are offloading broad swaths of bond ETFs. Still, global fixed income is getting a bit more of a bid.

For Lydon, as far as how investors are feeling and whether or not it’s time to look at cyclical for success, he notes how reflation trade is notable thanks to the optimistic look of reducing mandates. At the same time, there’s also diversification. Thematic strategies such as PEJ or the airlines’ US Global Jets ETF (JETS) are the kinds of funds that he believes are key to this sort of thing.

“We’re seeing the threat of rising interest rates in the U.S. However, overseas, not all developed countries suffer from the threat of rising rates. So, people are diversifying to areas like emerging markets, where it’s not only an opportunity to get a better yield, and you’re also not going to be threatened by central banks.”

There’s also the currency play; if the situation should arise that another foreign currency may be better than the U.S. dollar, there’s another form of diversification.

Davi, who runs the AXS Astoria Inflation Sensitive ETF (PPI), wanted to get together a fund that could adequately compensate. So, this ETF gives exposure to banks, energy, and industrial materials, as the data shows that those sectors do the best when it comes to rising inflation.

“We do also add commodities in there. We like commodities,” Davi adds. “We serve as an outsourced CIO for other financial advisors. We see these portfolios on the margins.” With that in mind, the lion’s share of the money is still in very deflationary sectors.

Davi states, “I think this value cyclical inflation trade is still in the early stages.” Looking around the world, Davy sees inflation at 15% or higher and thinks that people should be a lot more active with their portfolios.

Lydon also adds how gold is not currently the big protector it once was. He agrees with Davy that it is important to be diversified among a whole basket of different commodities, which can be seen with PPI.