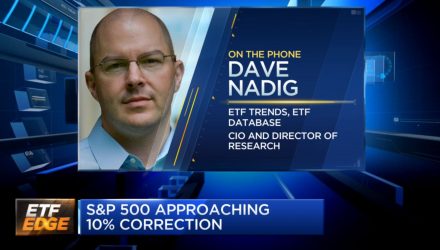 As the S&P 500 approaches a 10% correction, it’s time to take a look at what’s going on with rotating and re-opened funds. ETF Trends CIO and Director of Research, Dave Nadig, spoke with CNBC’s Bob Pisani about this trading activity and more on this week’s “ETF Edge.”

Nadig explains how there is a global concern in re-opening not going as smoothly as many hope. As a result, there’s a re-praising of many stocks that ran ahead of their fundamentals, with positive hopes for how the U.S. and global economy could have re-opened.

Still, that hasn’t quite happened, and many smart traders have known it. The assumption is that tech will be able to rollover. However, until there’s a real base of those core tech names at the top of the market cap spectrum, Nadig doesn’t see how there can even be a base.

Pisani then points out how, despite being a big down day, the heavy volume with the tech and cyclical-oriented ETFs have been holding up well for a couple of months now. With a down day such as this, it may read as some not feeling the re-opening story is not such a great narrative.

Market Not So Monolithic

That in mind, Nadig notes how a lot of the big days since the March volume have been on pretty thin volumes, so it’s proven to be a market that is not monolithic.

Nadig continues, “What we’re seeing is some of those come home to roost. I don’t see this as a Robinhood day trader story, necessarily, but when you look at things going on in the options market, and you see the volume of single contact trades, it’s hard not to believe that we’ve got a lot of retail investors who just had their first experience of what it’s like to ride something down to 10%. Whether those folks are willing to come back with that money when they find a bottom, I’m a little skeptical.”

Adding onto the conversation is Nick Colas, co-founder of DataTrek Research, who has a specific investment methodology. He notes how what’s going on right now seems to echo ghosts of 2008, with the political atmosphere adding to the need for further stimulus for the economy. And yet, it’s all tied up in election year issues. As a result, as Colas points out, there’s been a delayed fiscal reaction. That does mean markets are beginning to understand it will be a feature of the landscape now until election day, and possibly beyond.