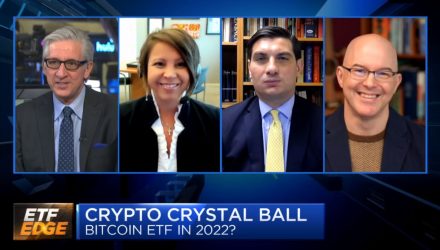 Inflation and Bitcoin remain the two big stories in the ETF World. For this week’s “ETF Edge,” host Bob Pisani is joined by Dave Nadig, ETF Trends’ CIO and Director of Research, James Davolos, Portfolio Manager at Horizon Kinetics, and Anna Paglia, Global Head of ETFs and Index Strategy at Invesco, to cover these topics.

First up, looking at why Invesco decided to withdraw its Bitcoin futures application, Paglia explains how it just didn’t feel like the right time to bring that product to market based on the current economic environment. Aspects such as the expense of Bitcoin futures, also known as the contango factor, among other projects showed Invesco that, unless they could align the return of the funds vs. the returns of the underlying commodity, it just wasn’t the right move for this current period.

Looking over at VanEck, which is launching a Bitcoin futures ETF later this week, there is a curiosity about whether that’s enough major firms that have entered this field. The costs and concerns about tracking issues are reasons to be skeptical. According to Nadig, there’s room for price competition, but not necessarily up to and over ten different funds at this stage.

With VanEck, specifically, this fund will be 30 basis points cheaper than BITO and BTF, which is a good enough way to build some form of competitiveness between companies. However, if there are prospects for additional firms to be adding to this field as well, it’s going to make some of these funds less distinguishable and more crowded. So, depending on where things are headed, some caution is warranted.

Pisani points out how the SEC rejected the pureplay Bitcoin ETF on the same grounds as they always have. They can’t prevent fraudulent and manipulative acts; therefore, it’s a rejection. As far as what could stop this long-standing complaint, Nadig feels there are options both short and long-term.

“Coinbase came out with a pretty solid proposal a couple of weeks ago, which basically asked Washington to give them a single regulator that’s not the SEC or the COTC. Whether we get that or something else, I think until we get clear regulation of the underlying coin markets themselves for U.S. investors, I just don’t think we’re going to cross that hurdle.”

Nadig goes on to add how a really solid physical Bitcoin ETF is still likely a year off from happening, at least. While that may be pessimistic, everything that’s taken place indicates that nothing will change absent clear regulatory control over added important areas of the crypto space.