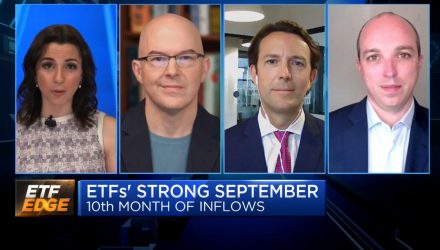 Aaron Neuwirth October 4, 2021
Stocks have been on a winning streak but nowhere near the run ETFs have had, with $46 billion in inflows. Host Leslie Picker fills in on CNBC’s “ETF Edge” to discuss the choice by investors to trim their exposure to longer-term bond ETFs in favor of short-term government bond ETFs, as rates have steadily risen. She is joined by ETF Trends’ CIO and Director of Research, Dave Nadig, along with GraniteShares’ Founder and CEO Will Rhind, and Matt Bartolini, Head of SPDR America’s Research at SSGA.
As far as how flows seemingly keep going toward ETFs, Nadig believes history can justify the reason. The more volatility present, the more people are going to look toward ETFs.
Nadig explains, “Every time we have one of these big drawdowns, there’s an opportunity for people to sell an underperforming active manager that maybe isn’t a mutual fund, or to take a hit on a tax position that maybe they’ve been hanging on to weigh it on. These are great opportunities for people to reassess their portfolios, and when they do that, they often end up back in the ETF market, looking at fairly low cost and plain vanilla-type equity exposures.”
Looking at this past September, there’s still a 2 to 1 equity to fixed income ratio in those flows, which is somewhat less than it has been, but more importantly, people seem to be playing more defense with some inflation plays. There has been a push into real estate, which shows people looking for opportunities to profit from some of this embedded structural inflation.

As a result, when looking at the sector and product shifts in recent weeks, Bartolini points out how there haven’t been many. Sector ETFs have had inflows for 12 consecutive weeks, which is the longest in their history. Over that timeframe, it’s taken in over $92 billion, which speaks to the disparity within the market for investors trying to utilize beta instruments in actively managed, tactically adjusted portfolios based on prevailing macroeconomic data.
Bartolini points to energy ETFs as an example. In the past two months, they’ve had over $2 billion in inflows as the price of oil has continued to creep higher. Similarly, the inflows to energy ETFs coincided with an uptick in call volumes, showing investor-types expressing viewpoints within ETFs.
He adds, “Now there was a bit of a shift when it comes to a cyclical vs. defensive perspective. It’s reflective of some of the lack of leadership in the marketplace.”
That speaks to the back-and-forth nature of cyclical and defensive sectors switching off from being on top. However, even with that cyclical camp, energy and real estate lead the way, but many people sold out of financials.
“But all told, we’re still seeing a lot of investors utilize the construct of sector ETFs to play to specific tactical allocations, particularly when return dispersion is so high.” Bartolini expects this to continue because the fourth quarter tends to be more volatile.