You are at:Home»Expert Insights»ETF Edge: Chasing Yield with GraniteShares’ HIPS 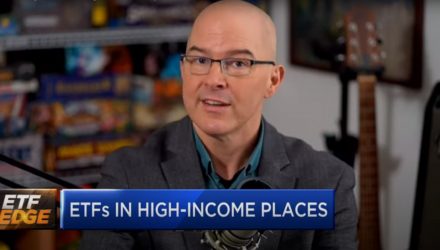 With the challenges of chasing yield, it’s good to look at some funds focusing on high yield. CEO and Founder of GraniteShares, Will Rhind, spoke on “ETF Edge,” with ETF Trends’ CIO and Director of Research, Dave Nadig, and CNBC host Eric Chemi, about the risks and rewards of the GraniteShares HIPS US High Income ETF (HIPS).

As Rhind explains, their income strategy revolves around thinking of different ways to generate income from traditional sources. That said, these days, traditional sources aren’t going to get investors where they want to be. So, HIPS focuses on high-income pass-through securities.

To clarify, Rhinds notes how “The focus is on an area of the market known as pass-through securities. They are non-corporate taxpayers. So, right of the bat, you have a class of securities at the market that doesn’t pay corporations taxes. So, automatically, you’re starting with a higher level of income distribution.”

With a fund like HIPS, it can generate a very high-income level based on all the areas it can focus on for holdings. As Rhind notes, HIPS is currently generating about 10% income per annum. It comes down to securities in the market that pay a high level of income but blending those in a diversified portfolio. It’s serving as a way to generate a high level of income in this particular income-staffed environment.

Moving over to Nadig, who finds HIPS to be an interesting way to approach the market, his thought is on total return.

“Just because something is paying a distribution yield of 10% doesn’t necessarily mean its total return supports that,” Nadig adds. “In some years, you may actually be reducing your capital to get that level of income. And some years, your total return is actually going to fund that for you. So, you need to know what you’re investing in the S&P 500 or a bond ladder. It’s a different set of asset classes with different sets of exposures. So as long as you look under the hood and understand that you are getting some various exposures, it’s a fine way to look at it.”

Rhind agrees that HIPS is not the only solution but a good part of a blended strategy in terms of generated income. He adds that looking at the portfolios from this year and seeing the underlying nav has fallen in value because two sectors, REITs and MLPs linked to energy, have fallen in value. That said, over the last couple of months, that’s started to come back thanks to positive news concerning the vaccine.